Would Harm a Senior 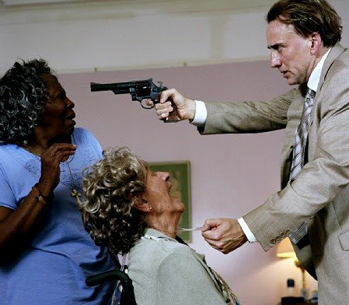 While seniors are usually exempt from harm due to harming the elderly being a taboo, there are exceptions. A villain hurting a senior is practically guaranteed to be a Kick the Dog moment at minimum. Whether a hero hits a villainous senior depends on how healthy they are, how dangerous their scheme is, and the hero's morality. An elderly villain who's clearly in good shape is more likely to get attacked by a hero, a villain that plans on killing someone is also likely to get hit if there are no other options, and an Anti-Hero might not care at all if they're violent enough.

Any video game that has an Old Master, Old Soldier, or Old Superhero as a playable character is likely to have this.

Compare Would Hurt a Child, when someone is willing to hurt someone younger than them. If the harm is domestic in nature, then it's Elder Abuse. Contrast When Elders Attack and Never Mess with Granny, as well as Evil Old Folks, when a senior would harm you.

The members of the Hateocracy hated each other. But they hated everyone else even more and thus teamed up to terrorize the retirement home they were in.

The members of the Hateocracy hated each other. But they hated everyone else even more and thus teamed up to terrorize the retirement home they were in.