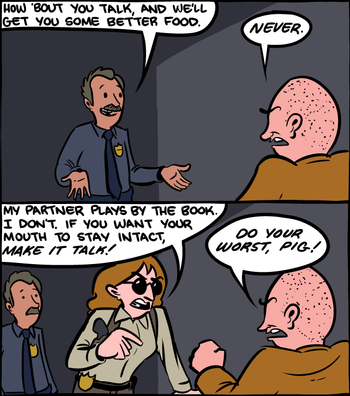 "Someone get ugly cop in here! He'll get him to crack for sure."
Hawkgirl: Standard interrogation technique. I was Bad Cop.
Superman: You're always Bad Cop.
Hawkgirl: Well, why play against type?
— Justice League, "The Terror Beyond"
Advertisement:

A type of Perp Sweating frequently used in Crime and Punishment Series.

One cop behaves in a very threatening and menacing way towards the suspect, while the other appears sympathetic, helpful and protective. The suspect is expected to be cooperative with the "good cop."

Sometimes the Genre Savvy suspect makes fun of this technique. Thus, an increasingly common variation is known as Bad Cop/Worse Cop, which is based on a reversal. The first cop behaves menacingly and threateningly, and the second cop appears initially to be sympathetic then, usually in a whisper, indicates his partner and tells the perp, "He's the good cop," before revealing a far harsher and more threatening attitude toward the perp. In the end, they're just two sides of the same coin, even if one is the "lesser evil".

Two cops arguing about who gets to be the Bad Cop is a common extension of the trope. It's also not too uncommon for the good cop to have to physically keep the bad cop away from an uppity suspect, whether genuinely or as part of the act.

This is Truth in Television. It's a classic interrogation technique, but in real life the Bad Cop doesn't need to threaten to beat a confession out - they may simply point out all the nasty things that will happen if the suspect doesn't come clean, while the Good Cop is the one to remind the suspect of the pros of being helpful, and make offers of lighter sentences and making deals with judges. Even so it is usually only used on naive and frightened suspects, because cooler heads tend to recognize it.

A Sub-Trope of Gentle Touch vs. Firm Hand. Not to Be Confused with the Canadian film Bon Cop, Bad Cop. See also The Easy Way or the Hard Way, Captain Smooth and Sergeant Rough and Rude Hero, Nice Sidekick.

The Other Wiki has an entry on Good Cop / Bad Cop.

In "Sexy Beast" from "Resident Alien," Sheriff Mike decides to take on the role of both good cop and bad cop when interrogating a stoner teenager. Hilarity ensues, but it does not get the results he hoped for.

In "Sexy Beast" from "Resident Alien," Sheriff Mike decides to take on the role of both good cop and bad cop when interrogating a stoner teenager. Hilarity ensues, but it does not get the results he hoped for.