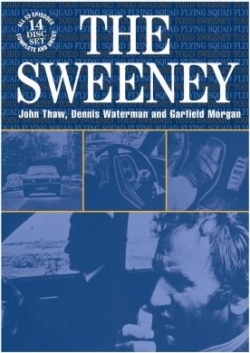 "We're the Sweeney, son, and we haven't had any dinner. You've kept us waiting, so unless you want a kicking, you tell us where those photographs are!"
— DI Jack Regan
Advertisement:

The characters were rough, hard-drinking and, by modern standards, highly sexist. Regan, while over forty, greying and divorced, was successful with women as part of his macho image (although his sex life became a plot point sometimes). Carter was married and a bit more stable and reliable than his "Guv'nor". In fact, Regan's "Guv'nor", Superintendent Haskins, felt Carter should be reassigned because Regan was a bad influence on him.

British television cop shows had been undergoing a steady evolution from the light-hearted Dixon of Dock Green to the relatively gritty Z Cars. The Sweeney took this to the next level, with an unprecedented level of violence, cynicism, and bad language (albeit that it was still PG-rated; "bastard" was as bad as it got)note  thery were allowed one "fucking", though. It was used to effect.. There was at least one car chase, fist fight or gunfight per episode. Unlike most British policemen, Regan and Carter were often armed — Truth in Television, as the Flying Squad, which had to deal with armed robbers, was the only police unit where officers carried firearms more often than not — but the squad frequently took down criminal gangs in brutal hand-to-hand battles fought with pick-axe handles, iron bars, fists and boots. Unlike the almost-contemporary Starsky & Hutch the violent action did not have a James Bond-movie feel to it, being instead down-and-dirty, and sometimes quite shocking. Gunfire was seldom non-lethal and people who got hurt stayed hurt. If a car crashed and burned, the people inside didn't climb out as in The A-Team, either!

Detective work was mainly a matter of asking informants, many of whom lived in fear, or of following people, or simply "knowing the manor" so well that the heroes could just guess who was the most likely suspect. Not much Sherlock Holmes or Hercule Poirot stuff happened, but it was often quite close to real police work.

Blatantly parodied in The Invisibles, where Jack and George of Division X are Carter and Regan to the life. Explained by saying that the invisibles created their cover identities from old '70s cop shows. Their boss Mr Crowley is a Shout-Out to George Cowley of The Professionals, another British police drama of the time. (Their fellow agent Mister Six, meanwhile, is a Shout-Out to Jason King of Department S.)

Gene Hunt of Life on Mars and Ashes to Ashes is a fairly obvious Shout-Out to Jack Regan and his ilk. (One is tempted to call him an Affectionate Parody, but he'd call one a poof for saying so. He'd call one a poof for saying "one" instead of "him" anyway.) Gerry Standing, Dennis Waterman's character in New Tricks, is another Affectionate Parody of what the characters from The Sweeney (George in particular) might look like thirty-odd years down the track.

The show was recorded entirely with film, and the production had a heavy reliance on location shooting, both of which were very unusual features at the time. Although it was extremely popular, a combination of high production costs and creator burnout meant that it only lasted for four series. Nonetheless it was very influential, directly inspiring ITV's successful The Professionals and The BBC's relatively unpopular Target.

A movie adaptation of the show was released in 2012.

This solemn ending themeto a show about crime, with it's own fast-paced intro music.

This solemn ending themeto a show about crime, with it's own fast-paced intro music.