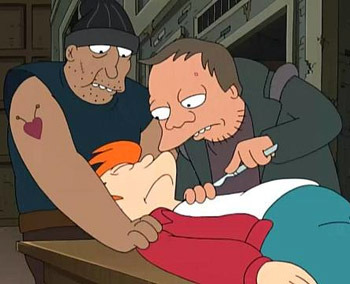 "Lay down on table. I take lungs now, you get gills next week... Uhh, you might feel small pain."
"I might not have a 'Med School Degree', but when you get shot, you'll be happy I'm here."
— Dr. Zed, Borderlands
Advertisement:

A surgeon with medical credentials that are... less than ideal. This could be for any number of reasons, from the surgeon having his license revoked, to actually being denied one in the first place, or (if you're lucky) he simply got it in the wrong country. One or more patients in the past may have died on his operating table due to improper procedures, mistakes, or lack of proper sanitation. Chances are they still do. Even so, he still gets a lot of business, simply because he never asks any questions. He does, however, expect you to do the same.

The Back Alley Doctor typically operates in a dimly lit, grungy, back-alley office, complete with nightmarish surgical tools which may or may not have been recently cleaned. Sterilization is optional, often involving cigarette lighters, hot plates, or that bottle of whiskey he's been sipping on all day, including during the surgery. The whiskey is likely to double as a painkiller and is safer than any pills he may have on hand. For really bad cases see Comically Inept Healing.

He's often the only medical recourse available to criminals, who may make up his entire clientele, due to legitimate doctors having to report gunshot wounds and other wounds inflicted by violence to the police. A Back Alley Doctor funded by organized crime might have as good or better equipment and practices than a legit doctor.

On the other hand, he may feature in a Dystopia where he fell afoul of the Obstructive Bureaucrat at best. His poverty may be the only problem in getting the best in medical treatment — well, that and the danger of getting busted. In settings where abortion is illegal, women may turn to this doctor (unless they are incredibly wealthy).

If more skilled, the Back Alley Doctor may provide plastic surgery as a means to hide the character's identity. Can cross with Open Heart Dentistry if one of the reasons he's not a doctor is that he was trained in a completely different medical field; veterinarians working on humans is a common occurrence. Horse vets operating on gangsters is practically a trope in and of itself due to the established links between organized crime and horse racing.

Such a doctor is a staple figure in Cyberpunk or other Used Future settings. He's the one various shady characters or protagonists on the run visit when they have to install or repair various implants, often stolen or illegal, or remove all manners of junk living in a futuristic dystopia tends to leave in one's body, such as inhibitors, loyalty enforcement implants, tracking devices or even built in Explosive Leash. May also dabble in Organ Theft or unlocking Neuro Vaults.

If they had a medical license previously but lost it due to ethics violations, they had a Doctor's Disgraceful Demotion.

Undoubtedly Truth in Television. May result in Comically Inept Healing.