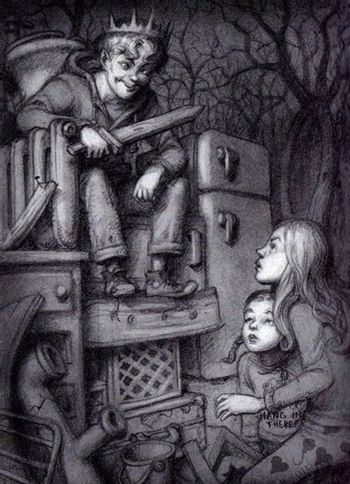 The Sisters Grimm is a series of fantasy mystery books by Michael Buckley.

The main protagonist, Sabrina Grimm, and her eight-year-old sister, Daphne Grimm, are related to The Brothers Grimm. You know, the guys who made all of those fairy tales. To make a long story short, the girls' parents disappear mysteriously. The girls skip around foster homes, which ensures the fact that Sabrina will be The Snark Knight. They go to live with a grandmother they didn't know they had. Sabrina meets the bane of her existence in the form of Puck, a four-thousand-year-old fairy prince turned king. They have to defeat the Ultimate Evil by solving a series of mysteries that eventually lead up to a war with the Scarlet Hand, an evil group of Everafters.

Almost always, Sabrina, Puck, and Daphne save the day, with the protagonist Sabrina solving most of the mysteries, by coincidence or logical reasoning.

They're basically about one big old Fractured Fairy Tale based around crimes that happen in the small town of Ferryport Landing. Ferryport Landing is your everyday, run-of-the-mill town where nothing is what it seems and fairytale creatures, called Everafters, roam the streets. Sometimes, mass destruction follows them, and somehow, none of the humans notice the strange magical happenings, although this can be attributed to the forgetful dust, which makes humans forget what happened. The series ran for nine books released over a eight-year span, with the Grand Finale being released in 2012.

All the books, in order, are:

Tropes and other misdemeanors: