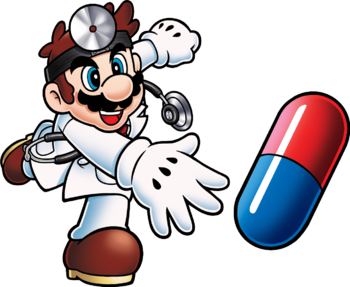 "Brightly colored pills! They'll cure all your ills!
Just as long as you've got fever or the chills!"
Advertisement:

Mario in this game has changed from a plucky plumber to a determined doctor who has to destroy all of the viruses (red, yellow and blue ones, with green and purple viruses introduced in Dr. Mario World). He uses a series of capsules to eliminate them (when four capsule pieces/viruses of the same color line up in a row).

Dr. Mario proved just as addictive as its puzzle game parent. "Fever" and "Chill", the game's two main themes, are almost as iconic as "Korobeiniki". Two other tunes, "Cough" and "Sneeze", have also been present since the N64 iteration.