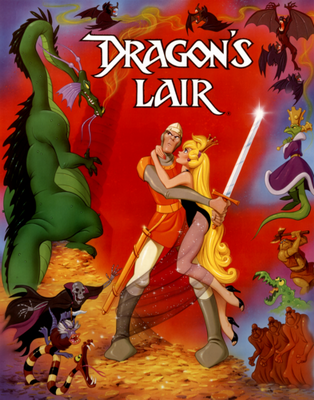 Saving princesses a few years before Mario or Link made it cool.
"Dragon's Lair: The fantasy adventure where you become a valiant knight, on a quest to rescue the fair princess from the clutches of an evil dragon. You control the actions of a daring adventurer, finding his way through the castle of a dark wizard, who has enchanted it with treacherous monsters and obstacles. In the mysterious caverns below the castle, your odyssey continues against the awesome forces that oppose your efforts to reach the Dragon's Lair. Lead on, adventurer. Your quest awaits!"
— Attract mode from Dragon's Lair
Advertisement:

Dragon's Lair was the first arcade game that utilized LaserDisc technology to provide an entirely new gaming experience... back in 1983, at least. Rick Dyer and Don Bluth basically created an entire animated world that was placed on a laserdisc, and animated progress screens, death scenes and the like played according to what direction you, as the player, moved via the joystick and "Sword" button, thus inventing the Interactive Movie genre.

Your role is Dirk the Daring, a brave yet still reluctant knight in medieval England whose goal is to save Princess Daphne from the clutches of Singe the Dragonnote His name was only found in promotional materials, and he is called by that name in the later TV series. Although Bluth played it straight for the most part in order to give it the feel of games of the era, the characters are somewhat on the cartoony side, as knight-errant Dirk is an average joe Comedic Hero, while Daphne is an over-the-top Ms. Fanservice whose look and poses were based on Playboy centerfolds.

The game itself has garnered a place in the Smithsonian Institution, and has had umpteen versions of home consoles, PC systems, smartphones and even homemade hacks adding further scenes and adventures. It also had an Animated Adaptation on ABC, courtesy of Ruby-Spears (Bluth had no involvement in it). The Coleco Adam version, Super Dragon's Lair, was notable for its then-revolutionary use of raster graphics

The game (along with its sci-fi counterpart Space Ace, as well as the sequel) was well-known for dozens of death scenes, all of which were unique to a given scenario. The cartoon included a variation by offering Dirk a choice of actions before each commercial, and showing what would have happened to him if he had made the wrong one in the next scene.

Even though it is the Trope Maker for Action Commands and Press X to Not Die, its common place among gamers may set them off. This is still probably better than every other FMV game ever made, though - save for those that followed this gameplay formula (like the aforementioned Space Ace, and Taito's Time Gal).

A movie was announced (and even storyboarded), but has languished in Development Hell for years. Bluth and his colleague Gary Goldman, trying to raise funds for it, attempted a Kickstarter campaign for the movie in late 2015. Unfortunately the campaign failed to reach even half of its proposed goal, and Bluth pulled the plug on it as of November 24, 2015. Despite this setback, Bluth and Goldman didn't give up and moved their fundraising to Indiegogo; the campaign was not only successfully funded, but far exceeded their minimum goal of donations. The film has now entered production.

There's also a six-issue comic that's based on the game that also incorporates elements from the cartoon series (such as Dirk's horse, Bertram).

It should be noted that Dragon's Lair was not the first laser disc game ever made (that honor belongs to a Horse Racing game called Quarter-Horse), but it was the one that started it all. It was also the first ever video game to (initially) cost 50 cents (i.e., two quarters) to play.note Not the first arcade game, however — that honor goes to Gottlieb's Black Hole pinball from 1981.