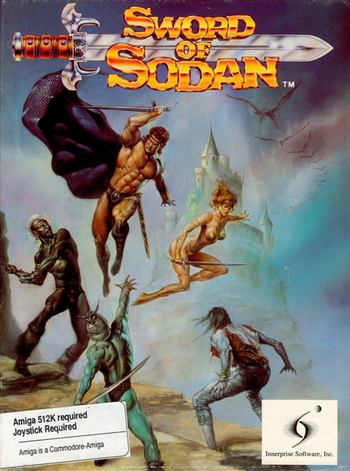 Sword of Sodan is an Amiga game released in 1988 by Discovery Software. The game play was a simple 2D hack-and-slash where you can take control as Brodan (the male hero), or Shardan (the female hero) who are twin siblings of Lordan, the king of a northern kingdom. They both were sent away to the mountains, under the protection of a bitter old man who also trains them in sword combat. When they learned of Lordan's kingdom being torn apart by the evil necromancer, Zoras, they set off, but not before the old man provides one of them with the Sword of Sodan. That very sword which had foiled Zoras' first attempt by Sodan himself.
Advertisement:

The game itself was well received for its time. Despite its simplistic gameplay, which was basically move forward and slash everything in front of you while occasionally mixing and using potions for power-ups, the graphics itself was impressive for the time. Big character sprites that looked fairly detailed, and the backgrounds being bright and colorful.

It was re-released in 1993 for the Amiga, and shortly thereafter, the Sega Genesis, which was handled by Electronic Arts. The former wasn't received as well, and the latter had changes done that made it worse. With enemies attacking on both sides instead of one, with levels and enemies cut, and increasing the overall difficulty with faulty controls (not to mention the exaggerated advertising on the box), among other flawed game design choices.

You can see Urinating Tree's review,

or the Joueur du Grenier's review (with subtitles)

of the game if you want to see for yourself.

Sword of Sodan provides examples of the following tropes: