Video Game / Dust: A Tale of the Wired West 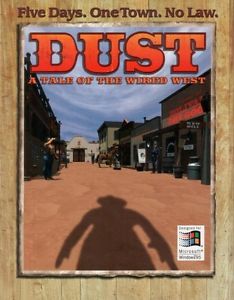 Dust: A Tale of the Wired West is a 1995 Wild West Adventure Game created by Cyberflix similar to (and taking place in the same universe as) Titanic: Adventure Out of Time from the same company which employed the same game engine.

The story takes place in May 1882. The player takes the role of a man only known as "The Stranger" who has to escape trough the desert fleeing from a group of outlaws led by "The Kid". He ends up in the small town of Diamondback in the deserts of New Mexico. The story takes place over five days and the player has to talk to the numerous inhabitants of the city, dig deep into its many mysteries and secrets, and prepare for another confrontation with The Kid and his gang.

Most of the game is presented in a Myst-like first-person Point-and-Click Game-perspective. However it is unique in also using keyboard based movement: a unique novelty for adventure games the time. It also includes other unique mechanics namely shooter based sections that are borderline First-Person Shooter.