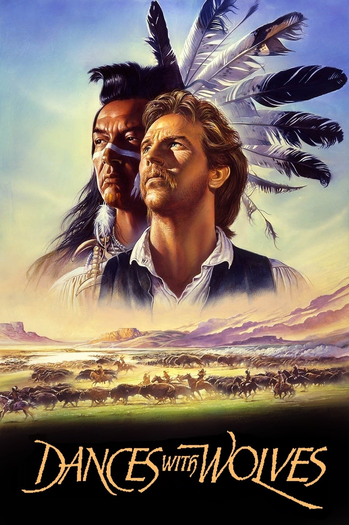 Dances with Wolves is an epic-length Western film adapted from Michael Blake's book of the same title. It is directed by Kevin Costner and written by Blake. It was released on November 9, 1990.

Set in 1863, United States Army lieutenant John J. Dunbar (Costner) is positioned in a fort on the expanding western frontier. Due to unfortunate circumstances, Dunbar becomes the only person occupying the fort and befriends a wild wolf while waiting for reinforcements to come. After some brief hostilities, he also comes into good terms with a neighboring Lakota community who nickname him "Dances With Wolves" for his relationship with the wolf who hangs around the fort, whom he names "Two Socks".

The film also stars Mary McDonnell as Stands with a Fist, Graham Greene as Kicking Bird, Floyd Kanghi Dutanote Dakota for "Red Crow" Westerman as Ten Bears, and Rodney A. Grant as Wind in His Hair.

Since this movie is a classic, it shouldn't be too hard to find a longer description that spoils the whole story. If seven Academy Awards don't tell you, it's worth a view. And one testament to the movie's excellent balance of fiction and historical accuracy — not to mention cultural sensitivity — is the fact that Kevin Costner was adopted as an honorary member of the Lakota Nation.

Also, this movie is not a musical.