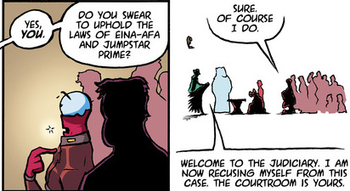 Radio Operator: Sarge, Command says air support is holding till they can assess our status.
Mal: Our status?! Our status is we need some gorram air support! Now get back online and tell them to get in here!
Radio Operator: They won't move without a lieutenant's authorization code, sir.
[Mal rips a command insignia off a dead man's uniform]
Mal: Here. Here's your code. You're Lieutenant Baker, congratulations on your promotion, now get me some air support!
— Firefly, "Serenity"
Advertisement:

A commanding officer — who may be in command now or may hold the correct rank for his position — sorely lacks in senior officers. Perhaps they're Trapped Behind Enemy Lines. Or communications are shot to hell. Or the senior officers were treacherously invited to a Nasty Party. Or he's piecing together something resembling a unit out of the shattered remains of an army. Any suitable disaster to remove them will do.

He must brevet many juniors. Expect some of them to panic for at least a minute or two. May also inspire moments of grief because their predecessor is dead — hopefully, no matter how beloved he was, not Losing the Team Spirit.

If the brevet rank

A slightly less chaotic situation may result in actual promotions as needed to fill the gaps, the actual field -- or battlefield -- promotions.

Closely related to Closest Thing We Got, and in fact many stories with Field Promotion also use that trope.

If you have no one left to promote you, You Are in Command Now instead.