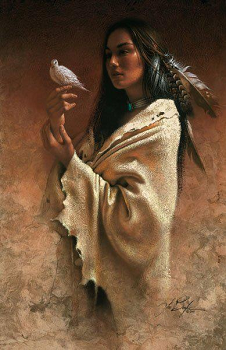 The Indian Maiden is the apple of both the Native and White man's eye, a slender young woman who can travel with her father/brothers on journeys as well as aid her mother and children in their tents as they prepare a meal for the hunters. She is also the calming force behind her father or chieftain, helping him through the difficult times of woe in an age that threatens their way of life. She will often have a Meaningful Name such as Little Rose or Quiet One that relates to her personality.

More often than not, she will fall in love accidentally with the White Man who likes her as well and wants to marry her. Often this can be seen as a litmus test to see whether the white man is worthy of being part of their tribe.