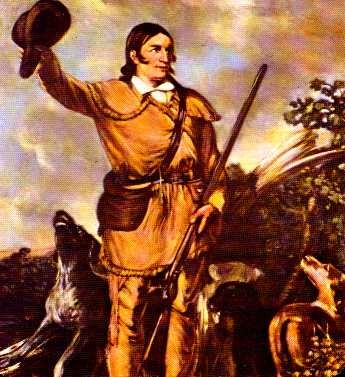 David "Davy" Crockett (August 17, 1786 – March 6, 1836) was an American frontiersman who went on to live a full life in both war and politics. He served in the Creek Indian War, then was elected to the Tennessee state legislature, and eventually to the House of Representatives. There, he opposed many of the bills by Andrew Jackson, particularly the Indian Removal Act, resulting in the end of his political career. As a result he left for Texas, where he died in the battle of the Alamo in 1836.

That's more or less the Cliff Notes version of his life, which was embedded in American popular culture. His exploits became exaggerated beyond what he did, including claims that he killed a bear at age three. He also published his own autobiography, which can be found here

The most famous interpretation of him probably came from Davy Crockett (1954), a five-part serial on the Disneyland television program, featuring Fess Parker in the lead role. He was also played by, among others, John Wayne in The Alamo (1960) and Billy Bob Thornton in The Alamo (2004).