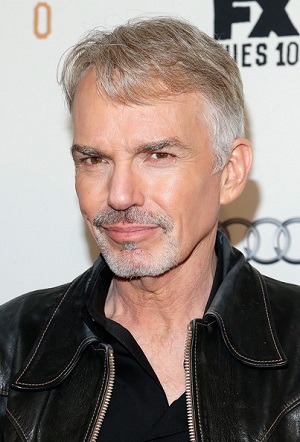 "Acting is playing—it's actually going out on a playground with the other kids and being in the game, and I need that. Writing satisfies that part of myself that longs to sit in my room and dream."
Advertisement:

His big break came in 1992 with One False Move, which he co-wrote and starred in. But he became an international name after directing, writing and starring in the dark and critically acclaimed Sling Blade, for which he won an Academy Award for Best Adapted Screenplay and was nominated for Best Actor. Since then his career has been both varied and successful, with Thornton picking up awards left and right as if he found them in his bathroom. Critics considers him an "anti-film star" who approaches his roles like a character actor, and they're not wrong. Thornton is regularly willing to change his appearance for a project.

Influential and highly respected, Thornton is known by both critical circles and casual audiences for his diversity, wide range, and prolificacy, appearing in at least one film per year nearly every year since 1991. Thornton has written a variety of films, usually set in the Southern United States and mainly co-written with Tom Epperson.

He's been married six times, most famously to fellow actor Angelina Jolie from 2000–03.

As Director and/or Writer