Large and in Charge 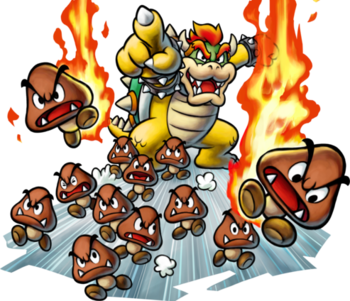 The tendency to visually depict leaders of an organization as large, physically intimidating people. This could be because people are more likely to follow orders from a big guy than a small one (because of the physically intimidating height). Exactly what flavor of "big" he (or she) will be depends chiefly on the character's personality, or sometimes species. He could be an Adipose Rex to symbolize his greed and decadence, but could instead be a towering seven-foot-tall man.

This is abundant in video games since these guys need to be able to make impressive bosses as well and players like big targets. Even when they have magic or machines for fighting, they still tend to be pretty big. Note that tall villains are not necessarily muscular or good at fighting, and in that case will usually have to rely on some shorter Mooks with Stout Strength.

Because Evil Is Bigger, this is more prevalent among villains. This applies to most of the brutish types of Always Chaotic Evil fantasy races, like orcs, hobgoblins, and some of the many, many types of trolls. Races which get Stronger with Age will tend to justify this either as the biggest individuals being Older and Wiser, or only very tough and resourceful ones reach old age. Thus, this trope most commonly applies to villains but there are also some heroic characters that qualify.

Related to Authority Equals Asskicking (or, perhaps, Asskicking Equals Authority). Also see Hitler Cam, the camera effect that you can use to accentuate height. Contrast The Napoleon (when he's in a leadership position).

Sometimes found in real life — in the modern world, elected leaders are generally of average or greater height. However, this is rarely taken to the kind of extremes found in video games. Also common in the animal kingdom, where in species such as lions, the largest males become the alphas of their prides/packs.

Can be found in art, especially B.C periods. The most prominent example is Egyptian art; almost all periods of European art before the Renaissance too. This makes sense, as people tend to pay more attention to bigger figures.

Contrast Mister Big (ironically) and The Napoleon. Adipose Rex is the trope for fat kings.