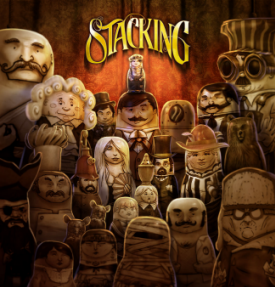 Stacking is an adventure puzzle game and Double Fine's second venture into downloadable games, following the release of Costume Quest.

Stacking takes place in a 1920's inspired world. That happens to be populated entirely by Russian matryoshka dolls. The game has you taking on the role of young chimney sweep Charlie Blackmore as he attempts to rescue his family from the clutches of an evil industrialist, The Baron, forcing them to work against their will. Charlie's tiny size proves very helpful in that it allows him to inhabit the body of any stacking doll bigger than himself and use that new form's skills to aid him in his quest.

As long as his target is larger (and not facing him) the youngster can stack several dolls upon each other, however only the skills of the outside doll can be utilised. This means Charlie has to unstack and stack accordingly in order to use the desired skill to overcome the games obstacles. The games puzzles have several means of being solved and as such rewards using different methods.

The lead director of this game is Lee Petty, the lead Art Director of Brütal Legend. He was inspired by watching his daughter playing with real matryoshka dolls and decided to make a game around it. Like Costume Quest, Tim Schafer took a back seat to allow Lee Petty to lead the project.

It was released February 9th for Xbox Live and PSN, and March 6th for Steam. PSN Plus subscribers got the game for free.