Continued from "To Where and Back Again – Part 1". 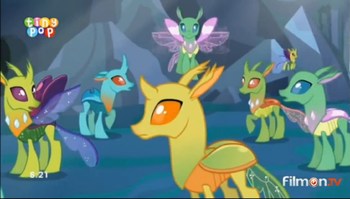 The Power of Love gives the changelings a magical makeover.
"You know nothing of the changelings or what it takes to be their queen! I decide what is best for my subjects, not some mewling grub!"
— Queen Chrysalis (to Starlight)
Special Guest Star: John de Lancie as Discord
Written by: Josh Haber and Michael Vogel
Advertisement:

At the Changeling Hive, Discord wonders why he and his companions couldn't enter the castle when he tried warping them in. Discord tries several more attempts at magical intrusion, all of which fail. Thorax explains that only changeling magic will work in the hive, since the throne of Queen Chrysalis is carved from a dark stone that blocks all magic except changeling transformation. Starlight says that their only hope is to get to the throne and destroy it. Though nervous, the unlikely heroes head for the hive to try to rescue their friends.

Once inside the Changeling Hive, Trixie and Discord begin arguing about the next course of action, prompting Starlight to nervously cut them off. She says that she's barely holding together as it is, and wants to focus. Thorax, despite being from the hive, gets them lost because of the constantly-shifting passageways of the hive. Trixie says they may as well wait to be fed on by changelings, but Thorax then reveals that he hasn't been hungry since meeting Spike, which explains his wings turning shiny and bright. Discord, still arguing with Trixie, accidentally shouts loud enough to get them noticed. Thinking quickly, Starlight has Thorax impersonate Trixie and use her smoke bombs to distract the patrol while the others move on.

Near another door, Discord distracts a set of changeling guards while Starlight, Trixie and Thorax flee. Discord seemingly comes across Fluttershy, but he instantly recognizes that it's a trap. All the same, changelings swarm him as Fluttershy, all with the possibility that one of them might be the real Fluttershy. Unable to cope with the idea, Discord is captured. Later, a changeling disguised as Discord attempts to lead Starlight, Trixie and Thorax the wrong way. Trixie volunteers herself to keep up the illusion, tying herself to the changeling to prevent it from capturing her friends. The ruse works, but Trixie is also captured.

Starlight comes across the cocoon pods containing the Royal Family, the Mane Six, Discord and Trixie in the throne room, but Queen Chrysalis is there to intercept her, along with the rest of the Changeling Hive. Chrysalis sticks Starlight to the ground, bragging about how she'll replace all of Equestria's most powerful ponies with drones to feed her love, until she has Equestria completely under her control and obedient to only her.

While talking, she notices a gleam in Starlight's eyes, recognizing her as Thorax in disguise. The real Starlight's attempt to use the distraction and break the throne on her own fails, and Chrysalis mocks them all for their failed rescue. Chrysalis lifts Thorax from the ground and begins to drain his love as punishment for betraying her, with Starlight calling out for him to share his love rather than hold onto it. As he does, a blast of the love he's gathered sends Chrysalis flying into her throne and cracks it, with Thorax's body changing to a bright, colorful form.

The rest of the changelings follow suit, all of their combined sharing of love destroying the throne room, along with Chrysalis's throne, and causing the cocoons holding everyone prisoner to fall and burst open, freeing them and letting them use their magic again. Chrysalis gets back up ready to fight, but quickly realizes she's outnumbered as everyone glares furiously at her. Starlight offers Chrysalis the chance for redemption she was given: to be a real leader instead of ruling by fear. Chrysalis rejects the chance, vowing revenge on Starlight for ruining her vengeance on the Royal Family and Mane Six, before flying away, alone. Celestia approaches Thorax and announces him the new ruler of the hive. Since the hive no longer blocks non-changeling magic, Starlight ask Discord for one favor.

At the Sunset Festival back in her old village, Starlight apologizes for running off so quickly, then admits she understands that she really has changed for the better. She's learned that a good leader doesn't rule by fear or by forcing others to listen, but by using their strengths and abilities. The villagers allowed all of Starlight's friends, including the Royal Family and Discord, to join the Sunset Festival, though Rainbow Dash admits that they'll all need to be caught up to speed on all that's happened between when they saw Starlight off and when they were freed from the cocoons.

Starlight Glimmer, a redeemed villain herself, offers the now-defeated Queen Chrysalis a chance to abandon her evil ways and become a better leader for the newly-reformed changelings. Chrysalis refuses the offer with a slap on the hoof and flies away, but not before swearing revenge towards Starlight.

Starlight Glimmer, a redeemed villain herself, offers the now-defeated Queen Chrysalis a chance to abandon her evil ways and become a better leader for the newly-reformed changelings. Chrysalis refuses the offer with a slap on the hoof and flies away, but not before swearing revenge towards Starlight.