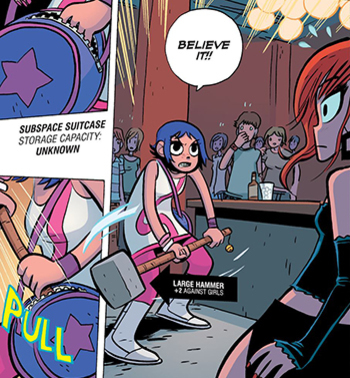 "No, that's not what I meant when I said I wanted to get hammered tonight."
"From this bag here, why, I can pull most anything imag'nable
Like office desks and lava lights and Bert, who is a cannibal."
— "I Am the Very Model of a Cartoon Individual" by Yakko Warner, Animaniacs
Advertisement:

Hammerspace is the notional place that things come from when they are needed, and where they go back to when not. The term was fan coined as the place cartoon characters and anime/manga characters would store the overly-large hammers and assorted weaponry they had a propensity for hitting each other with, especially for comedic effect.

The actual location of hammerspace is very hard to determine. There seems to be a great deal of it behind people's backs and on the opposite side (from the camera, that is) of thin things like lampposts and slender trees. It also hides in people's own body, coats, closets, clown cars, large sacks, and occasionally down their bras and pants.

Further research into the exact location of Hammerspace awaits solution of a few more basic questions. Such as: "What happens when you turn a Bag of Holding inside out?" and "Why is the inside of the TARDIS only that much larger than its exterior?"

It's also referred to as "hyperspace", but that term gets a little confused with the SF term related to Faster-Than-Light Travel (see Subspace or Hyperspace). Just to confuse things further, "subspace" is a word used in Transformers fandom for Hammerspace. It is called "katanaspace" in Highlander fandom, "back pockets" in the cartoon roleplaying game Toon, and referred to simply as "Elsewhere" in the Fantasy Kitchen Sink roleplaying game Exalted.

There are multiple versions, in order of size:

To take even more comedy out of what is already impossible, a character with established access to Infinite Hammerspace may, after packing it full of things, finally fill it up. With Basic Hammerspace, they are more likely to lose access to it for some reason and be unable to retrieve an item.

All Point-and-Click adventure games had this to an extent or another, because of the technical limitations of the medium preventing these games from having the hundreds of thousands of sprites necessary to represent your character holding any combination of inventory items you can have. So it's usually treated humorously instead.

The term "Hammerspace" originated in the Ranma ½ fanfiction community, ironically largely as a result of Fanon, as neither the titular Ranma nor the character most often associated with it (Akane Tendo) exhibited this trope to an excessive degree, though it was present in the source material.

Physicists are still split over whether or not there is a Hammerspace-Hammertime continuum.

Using a mystical mask in Tarakudo's likeness, the J-Team imprisons the King of the Shadowkhan, along with all of his forces. Jade can't help but comment on it being crowded in there.

Using a mystical mask in Tarakudo's likeness, the J-Team imprisons the King of the Shadowkhan, along with all of his forces. Jade can't help but comment on it being crowded in there.