Sticks to the Back 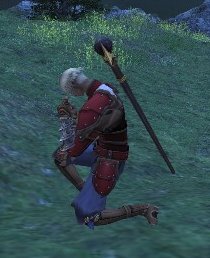 Sometimes not so much "sticks to" as "floats on".
"Putting Velcro on your sword is an old adventurer's trick."
"Clever!"
— Unskippable, on Two Worlds
Advertisement:

When you're an Action-Adventure Hero, lacking a Hyperspace Arsenal can be somewhat problematic: carrying that BFS around is not only tiresome, it also takes away a free hand that would see much better use in the complex acrobatics that are so common in your line of work. Luckily, Trope Co. has the next best thing to offer: a form of Hand Waving that lets the badass just slide his pointy tool along his dorsum and have it held in place by some invisible force.

One could even say that like how cartoon characters can pick stuff up without fingers, sometimes a sword just Sticks to the Back.

This phenomenon also allows characters to draw swords that outstrip their entire arm — after all, there's no actual scabbard to get in the way. Note that though the words "sword" and "back" are used a lot through this article, this trope covers any and all situations where a character's equipment is held in place without a viable sheathing mechanism, be it by the hip or on the back, a BFG or a shield, by a diminutive sash or someone's bare skin, etcetera.

Compare to Magnet Hands. Can be considered a form of Impossibly Cool Clothes. If the weapon is stuck to the back and rarely actually used, then it's an Ornamental Weapon.