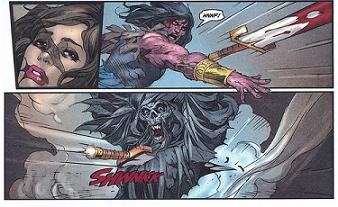 "You are unwise to lower your defenses!"
"We've all seen it a dozen times in the vids. Some hero's just about to lose the climactic battle. Out of desperation, he throws his sword. It flies end-over-end (usually with the camera right behind it) and plunges through the villain, skewering him like a Morrocan shish kebab."
— The Last Crusaders sourcebook for Deadlands: Hell on Earth
Advertisement:

In Real Life, a sword is not really designed for throwing. Its shape and weight are optimized for slicing, thrusting, and other movements driven mostly by the user's arms, and not for aerodynamically moving through the air on momentum alone. In addition, throwing your sword usually leaves you unarmed, so even if you do score a hit, if you do not kill your opponent, you are still in a great deal of danger.

But in fiction, throwing your sword always works! Whether it's used by a hero as a last-ditch display of valiance or by anyone else just for Rule of Cool, the prospect of combining deadly blades and high speeds is just too good to pass up. Best of all, it allows for a tense, dramatic wind-up AND a dramatic payoff. The fact that logically there should be an at least fair chance of hitting your target with the wrong end is casually ignored.

Some times the character will throw his sword more like a boomerang: horizontally and with a spin on it. While this certainly does make it more likely to cut the opponent, it does raise other questions about the logistics of such an act...

However, Truth in Television is not completely lacking here. Historically, certain straight-bladed swords (primarily mediaeval arming swords and longswords) could be thrown, but not in the way typically seen in the media. Throwing a sword end-over-end as is commonly shown has little practicality, and is not likely to hit a target point firstnote Although, depending on the mass of the sword, even getting hit by the "wrong" end could still do some serious damage - broken ribs or the like do tend to impair one's ability to fight. (and if it does, it has a chance of just bouncing off

). Instead, a sword could be gripped backwards by the guard and the end of the blade, and thrown straight similarly to a javelin. This, while still a situational technique, could allow the sword to be thrown accurately at reasonable distances, potentially hitting an enemy point first with some effectiveness. Also, this tactic makes quite a bit more sense for curved swords: for much the same reason that it works for axes. You are much more likely to hit the opponent with the blade, and the sharp surface of the sword is very large making an effective hit much more likely. Especially against a lightly armored opponent, this has some chance of actually working. It does still have the disadvantage of leaving you unarmed, unless you are wielding two swords or something.

Compare Ballistic Bone and Detachable Blades. Contrast (or compare as well) Throwing Your Gun at the Enemy, which makes ranged use out of another weapon (in this case, a weapon that already is ranged) in an unconventional way. See also Throwing Your Shield Always Works too (only actually Truth in Television for the Spartan hoplon, which had a sharpened edge and if thrown like a frisbee at short range was capable of performing a crude tracheotomy. Most shields however have dull edges, and aren't likely to do much more damage than just throwing a random object of the same weight.) This almost always results in The Blade Always Lands Pointy End In, although that can also result from accidental falls as well as deliberate throws. When the thrown sword is used as a ladder, stepping stone, or perch, it will also be Stepping-Stone Sword. Summon to Hand can negate the negative side effects of this. Contrast Give Me a Sword, where the character may throw the sword but is not intending to commit any damage, just trying to get it to someone who can use it.

Also note that many knives ARE designed to be thrown, even some that are rather larger than your typical pocket knife or hunting knife.

During a weapon-throwing duel, Social threw his cleaver into Bundy's face shield, who returned the favour by killing him with a sword throw.

During a weapon-throwing duel, Social threw his cleaver into Bundy's face shield, who returned the favour by killing him with a sword throw.