Film / The Prisoner of Zenda 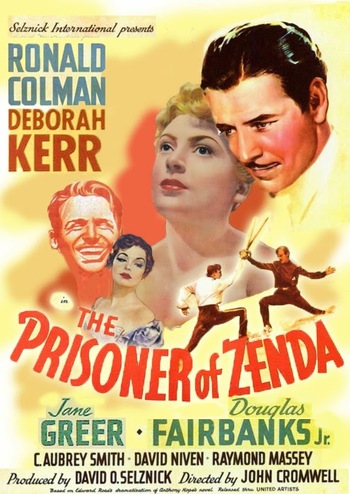 Toward the close of the last century, when History still wore a Rose, and Politics had not yet outgrown the waltz...
Advertisement:

There have been many film adaptations of the Anthony Hope novel The Prisoner of Zenda. There were silent versions in 1913 and 1915; another silent version in 1922, starring Lewis Stone as Rudolf/Rudolph and Ramon Novarro as Rupert; a 1952 version with Stewart Granger, James Mason, and Deborah Kerr; a 1979 version starring Peter Sellers in one of his last roles; and a TV movie version in 1984.

The most famous, however, is the 1937 David O. Selznick production directed by John Cromwell. The film stars Ronald Colman in the dual role of Rudolf Rassendyll, English gentleman, and Rudolph V, the ne'er-do-well king (the name is spelled both ways in the film); and co-stars Madeleine Carroll, as the lovely and lively Princess Flavia, and Douglas Fairbanks Jr., as the wicked but engaging Count Rupert of Hentzau. Raymond Massey as the saturnine and ambitious Duke Michael, Mary Astor as his beautiful but hapless mistress Antoinette de Mauban, C. Aubrey Smith as the crusty, Macchiavellian Colonel Zapt [sic], and David Niven (in his first major role) as the faithful though feckless Fritz von Tarlenheim lend sterling support. The sweeping romantic score, supported by use of Wagnerian leitmotives, is by Alfred Newman.