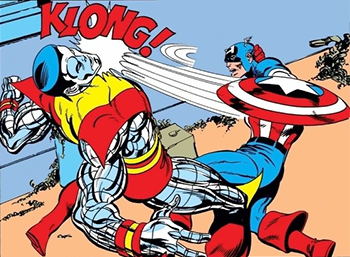 Thrust your shield against the defenses of your enemy, causing the fiend to recoil.
Ganon: You went through nine dungeons?
Link: Yep.
Ganon: Hundreds of my minions?
Link: Uh huh.
Ganon: All without a weapon?!
Link: Well, uh, I have my smashing board.
Ganon: That's a shield.
Link: Nah, smashing board.
Ganon: A smashing b... It's a shield! It's a shield! It's for defense!
Link: (pummels Ganon to death with the shield) Works okay for me.
— Link Didn't Get Sword, Dorkly Bits
Advertisement:

Your shield can always protect you, if you so choose. However, it can be useful for more than just defending. Shields are relatively large, heavy, and hard to counter because you are attacking and defending at the same time. So why not go on and hit your opponent with it?

As shields are perceived as less suitable for straight attacking than traditional weapons, they do less damage but have a decent chance to cause effects like Knock Back or stunning. Using shields that way is a staple characteristic of shield-wielding type of Stone Wall. Also, shields can have spikes on them (often a single one in the center).

Note that in real life this was actually a fairly practical technique before the proliferation of gunpowder weapons made them unfeasibly heavy and expensive, and is still practical in scenarios that don't involve being shot at. A shield is large, sturdy, and oftentimes heavy, and by its very nature, bashing with it leaves one less open for counter attack than plenty of other techniques. Many historical shields were even designed with some sort of metal protrusion for exactly this purpose. It's still not as damaging as stabbing someone with a sword, but it is harder to block, unpredictable, and doesn't mean that one can't bash a target with a shield and then stab before the target can recover. Particularly dangerous are a number of fellows forming a wall of shields and charging forward like a mobile wall, especially while carrying something sharp in their other hand, ready to thrust through the gaps between the shields.

If reality is really out for lunch and your battles aren't supposed to be realistic, the shield can be thrown like a boomerang.

If a force field or Deflector Shield is used like this, then it's a variation of Deadly Force Field.