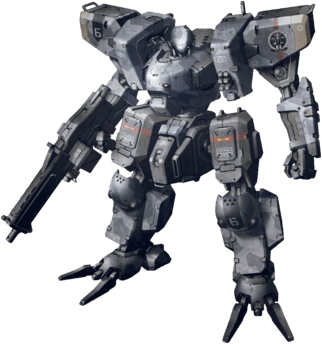 A marriage between Cool and (relatively) Realistic. More or less the franchise in a nutshell.
Advertisement:

Two things set it apart from other mecha games: it is a Turn-Based Strategy (unheard of in 1995 outside of Super Robot Wars), and it applies as much realism as can be expected with giant robots. Logistics matter, the Wanzers are easily destroyed, winning battles requires teamwork, and the stories are heavily packed with Realpolitik.

With regards to the games, the series currently consists of five mainline titles and seven offshoots:

The series is known for regularly venturing into other genres. Gun Hazard is a side-scrolling shooter developed by the lead designer of Assault Suits Valken. Front Mission: Alternative ventures into real-time strategy (RTS). Front Mission: Online is the massively multiplayer online (MMO) game and the first third-person shooter (TPS) for the PS2 and PC. Front Mission Evolved, another TPS spinoff, was released on the PS3, Xbox 360, and PC. Lastly, Left Alive, also a TPS spinoff, was released in 2018 for PS4 and PC. Only a handful of titles have made it outside Japan, as the majority of the series (including two mainline entries) remain Japan-only.

Games aren't the only things Front Mission is noted for. Though virtually unknown to the Western world thanks to Square's mishandling of its overseas marketing (only some of the games were localized), the franchise has a large media presence in Japan, including mangas, novels, radio dramas, and even live-action films. In fact, these other Front Mission works are linked to the video games so closely that they are necessary for completely understanding the stories. The most successful of these products are the manga and novels, which are perennial top-sellers in the mature/adult age bracket in Japan.

There is a character page desperately in need of work.