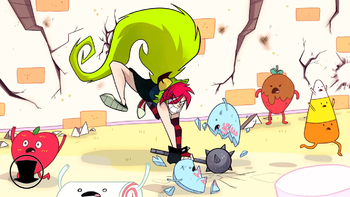 Crossing dimensions just to smash the local Sugar Bowl.
"What this lacks in finesse, it makes up in spikes."
— Description of the "Barbarian Mace" in Dragon Age: Origins
Advertisement:

Something about taking a simple club and adding a whole bunch of spikes on it makes it look ten times more dangerous. Perhaps it's because it gets rid of any elegance that may be associated with other weapons, so you're left with something that screams "this was made to smash, stab, cause physical pain, and NOTHING ELSE!", making it as Obviously Evil as a weapon can look. The flail variants look even more dangerous by making the user able to spin and whip it around in flashy and destructive ways.

In fiction, spiked clubs and flails are often used by the more unhinged and violent, with a lot of versatility in character archetypes, too. Due to the lack of elegance in its design and how simple some variants of it are to make, they are a common weapon for the standard Mook as well as the stronger Smash Mook. Their primitive appearance that puts emphasis on destruction above all else makes them popular weapons for Dumb Muscle types. Spiky brass knuckles and baseball bats are popular for stereotypical violent criminals, be it a street punk, biker, or mafia legbreaker. A spiked club or mace's almost cartoonishly dangerous appearance makes them a fitting weapon for stereotypically psychotic and Ax-Crazy characters; spiked flails are also a good way to emphasize their insane and erratic personality with them swinging them around. Spiked gauntlets, warhammers with a spiked hammer head and more intricate examples of a spiked club or mace (ones that don't look like somebody just stuck a bunch of nails into a piece of wood) aren't uncommon to see being used by evil knights or noblemen, and at times Evil Overlord characters. Its savage design also makes it popular for stereotypical barbarian characters, whether it be for Mooks in a Barbarian Tribe or a Barbarian Hero. If a heroic character wields it, they are usually a a brawler who loves a good fight and/or a more mean and unpleasant character.

While normally associated with clubs or maces and flails. The trope also sees itself crossing over from time to time with war hammers. As the spikes on the flat broad ends of the hammerhead can just outright make them look like giant meat tenderizers, thus even more savage than a warhammer can already be. Although even then, meat tenderizers in of themselves make good weapons for those whom need to improvise on the fly or for those meat-obsessed psychos.note Cannibalism, To Serve Man and The Secret of Long Pork Pies tropes. May or may not be required.

Also thanks to the prevalence of Zombie Apocalypse fiction, baseball bats/wood planks/Two By Fores with nails or other spiky sharp objects then rammed, attached or nailed through or to them. Has become a very popular practice despite their impracticality, but they definitely look intimidating and cool. They can appear in the hands of both heroic survivors or evil raiders/bandits. Although usually whomever carries these savage whackers are depicted as being eager to bust some heads (both undead and living). Another practice is just having barbed-wire wrapped around it.note Thank a certain popular character from a piece of zombie fiction for that.

Such weapons are very much Truth in Television. However rather than pure intimidation, such projections helped contend with plate armor in much the same way as hammers: by allowing the energy of the blow to be focused on a smaller point. Ironically, the spiked flail commonly found in fiction never actually existed during the Middle Ages in Europe. This was instead a distinct weapon called the morning star, which evolved from the club.

By its very nature, examples of this trope usually crossover with Carry a Big Stick, Epic Flail, Batter Up!, Drop the Hammer, and Power Fist. Common character archetypes seen with these include Mook, Smash Mook, Dumb Muscle, The Brute, Ax-Crazy, The Berserker, and Blood Knight. For more tropes on weapons reflecting a character's personality, see Royal Rapier, Sinister Switchblade, Knightly Sword and Shield and Good Weapon, Evil Weapon. Related to Serrated Blade of Pain and Boulder Bludgeon, and some examples/the general concept of this trope could almost be considered a combination of the two. May count as an Improvised Weapon depending on the quality of the weapon and/or circumstances of it's use. Primitive Clubs, where strong but crude bludgeons are used to communicate that a character is primitive and barbaric, thusly is a sister trope. See also Spikes of Villainy, Spikes of Doom, and Spike Balls of Doom for other spike-related tropes.