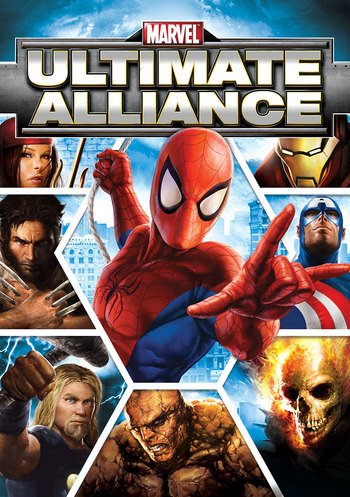 Marvel Ultimate Alliance is an Action RPG series published by Activision and developed by Raven Software and Vicarious Visions, starring many of Marvel's most popular superheroes and supervillains. A spiritual successor of sorts to the X-Men Legends series (arguably a sequel to the second, but the first is in a continuity of its own), which was also developed by Raven. The first one was released in 2006 and took you through a tour of the Marvel Universe trying to stop Doctor Doom and his Masters of Evil.

The sequel was released in 2009, developed solely by Vicarious Visions (due to Raven opting to do the X-Men Origins: Wolverine tie-in game on their own at the same time), is based on the Secret War and Civil War events before eventually splitting off into an original plotline altogether. The heroes are split into pro-Registration and anti-Registration as the plot progresses and the player's decisions will affect the ending as well as which characters they can choose.

Both games had versions released on the PlayStation 2, PlayStation 3, Xbox 360, Nintendo Wii, Nintendo DS, and PlayStation Portable. All versions of the first game were essentially the exact same game apart from graphics and exclusive characters (which is proven by the PC port, which allowed for switching between both sets of graphics on the fly as well as game modding). The differences between versions of the second game are more drastic; the Xbox 360 and PS3 versions were made from scratch whereas the Wii, PS2, and PSP versions are more or less a Mission-Pack Sequel.

Both games received ports for the PlayStation 4 and Xbox One in 2016, and the Xbox 360 versions' DLC was added to the game for free. The second game was also ported over to PC, marking the first time that it's ever been made available on the format.

exclusively for Nintendo Switch at The Game Awards 2018. This new entry features a cosmic-based plot that sees The Avengers, X-Men and the Guardians of the Galaxy (among others) teaming up to take down Thanos' titular squad. This installment was developed by Team Ninja and published by Nintendo.

Not to Be Confused with Marvel: Avengers Alliance.