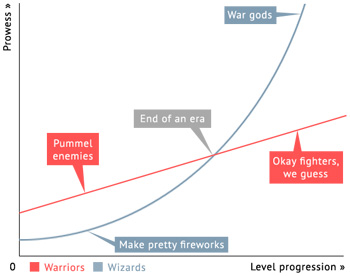 If by "war gods" you mean "flame-spewing apocalypse in human form," then yeah.
Advertisement:

A quirk some Video Game and especially Tabletop RPG game systems share is that melee classes are more powerful, versatile or useful at lower levels than casters or magic-using classes. However, the trend reverses at higher levels, when the magic users gain a breadth of both versatility and pure power over simplistic hack and slash heroes.

The divide is usually exacerbated by the ease with which a young warrior can go wading into combat compared to a novice mage. The fighter just needs decent armor and a weapon, and with their marvelous Hit Points, they can get into the thick of things and do reasonably well. Magical weapons aren't required but can (usually) be used immediately and give amazing bonuses. Wizards, on the other hand (especially young/low level ones), have no such easy shortcuts to massive magical power; they have to study, find or invent spells, and discover magic items that aren't so powerful they cause them to go into a Superpower Meltdown. In the meantime, they are nearly defenseless in a fight.

Yet the trend reverses at higher levels. As the trope name says, the power of a warrior is linear. It grows at a steady pace whose increase can be predicted by simple arithmetic. But a wizard's power is quadratic or even exponential: as it grows, the rate of growth also multiplies. Learning something such as a spell leads to multiple, often unpredictable, varieties of more things to learn, in a manner similar to how a single infected person can infect multiple people unpredictably, or how a Wiki Walk on TV Tropes or The Other Wiki forces you to follow more links which lead to discovery of more varieties of knowledge and tropes which have lots of interesting links themselves that lead to more countless instances of discovering tropes, and so on. Thus, in the end wizards must at some point become the more powerful class. For example, while warriors are still stuck at physical hacking and slashing, wizards have discovered how to warp reality itself.

Whether it's the game designers intentionally "making up" for lots of frailty for many levels, or a quirk that comes up during play, the wizard simply outpaces all but the most Min Maxed and Munchkined out warriors.

This isn't just a Sour Grapes complaint against Squishy Wizards or a lack of Competitive Balance throughout the game, but can be a deliberate thematic choice.

First off, the idea that warriors hit a development celing at some point. They hit the limits of human (or near-human) ability and can't bend physics any farther. Since warriors don't have magic, how is physical force supposed to beat, say, an intangible ghost or some supernatural baddie with the magical ability to ignore it? Basically, warriors can only be so fantastic, so even as they improve, those improvements mean less.

Secondly, in such a setting, there may be dozens if not hundreds of small-time mystic dabblers, but they quickly thin in numbers, only to resurface as potent adventuring wizards, culminating in the classic mystic powerhouse like Gandalf or Elminster, or the Evil Sorcerer in the Evil Tower of Ominousness. Meanwhile, the Conans and Beowulfs have the run of the place, being able to both solo and group. In essence, the mages study under the promise of a dull and complex path with great profits at the end.

Thirdly, there's more than a bit of Wish-Fulfillment here. Gamers, and by extension game designers, tend to be nerds by definition. The notion that a wizard (generally something of a brainy bookworm) may start out weaker than the Dumb Muscle, but surpass them entirely in the endgame, proving that knowledge is power that can modify the environment itself, thus making large muscles redundant in comparison? This account holds a lot of inherent appeal to them.

However, if this results from a development mistake, or enough complaints convince the author/programmer to change things, there are ways to limit the awesomeness of wizards. These include restrictions on magic itself, the two classic examples being the Mana mechanic or the even more restrictive Vancian Magic. Both of these serve to cap how often a wizard can cast spells. Preventing casting spells while wearing armour is another, though this is often partially countered by providing a range of protective magics that work much like normal armour only better, but of course for a limited time. Other restrictions also exist; a common one is simply to make the wizard Squishy. Others involve sanity and corruption systems, or making the casting of a spell a tactically debilitating act.

As you can imagine, players who specifically chose wizards and worked hard to keep them alive with the promise of great power for their effort can be...upset by this game balancing Nerfing, unless (and sometimes especially because) it also beefs up wizards at low levels. The solution is rarely to power up warriors while only slightly depowering wizards generally because, at least in the West, there's an expectation that the warrior be a Badass Normal that you can more easily imagine that you could become with enough effort.

These fixes can result in or from some pretty strange logic and situations. Sure, the wizard can do more amazing and effective stuff than the warrior can, but the warrior can do his less impressive things indefinitely! That makes up for it, right?... Well, sometimes. A tough flurry of Random Encounters can suck a mage's supply of game breaking magic, which will force them to save a bit of juice for that final boss, and not waste their power. But in some games, wizards can recover their magic faster as they level up, and other games have infinitely available elixirs that recover magic quickly. Still other times, you end up with the opposite problem, wizards whose capacity to fight is so restricted that you wonder why the warriors even bother to bring them along (when this makes sense, it's because of the Inverse Law of Utility and Lethality being applied).

In games that involve both PvP and singleplayer vs AI gameplay, especially the ones that require you to play both to advance on either, the base game theory and thus Metagame can be completely different from if they were separated, which makes fanbases even less pleasable.

Tropes Are Not Bad is still in effect however, and some well-thought out games encourage a party to have Warriors to pull them through the early levels and then sit back and watch the mages repay them later on and neither a all-warrior or all-mage team would have succeeded. The problem largely lies in how many times the Mage overshoots the warrior rather early on, rather than say, halfway through.

Attempts to keep warriors' capabilities "normal" are far less prevalent in works of Eastern origin which are more likely to give their warriors Charles Atlas Superpower, and so the trope has weakened slightly in the minds of the younger generation. Other character types, such as the Magic Knight, the Kung-Fu Wizard, and practitioners of Full-Contact Magic, mingle both styles of fighting to their own advantage by either using magic to augment raw strength or training their physical abilities to "power up" their magical attacks.

There are quite a few cases where this is the inverse: "Wizards don't need equipment to be more useful" turns into "Wizards can't use equipment to be more useful", and Fighters with their attack speed, critical strikes, weapons that deal higher damage, and so on, eventually outpace Wizards, whose power comes simply from the spell's level that cannot be increased any further. A curious recurring inversion that's exclusive almost entirely to JRPGs owes its existence to the concept of a damage cap: in attempt to help the Fighters overcome this trope, games sometimes (if their Agility or a similar stat is high enough) allow them to deal several attacks in one turn by pressing "Attack" once—and if every instance of damage is capped out at 999, it doesn't matter how powerful and flashy a Wizard's spell is, since it only hits once, compared to a Fighter's twenty attacks. Another reason why the inverse can occur is when the warriors and wizards are compared entirely on account of their destructive power. Rarely in a debate on the presence of warriors and wizards will the healer come up, for example. Outside of tabletop games and some video games, the warriors and wizards only really can be used to defeat monsters; abilities that circumvent obstacles, such as flying between mountain peaks, are never used or considered, meaning that the wizard's versatility, often their greatest strength, essentially means nothing when they can't apply it outside of combat.

A subtrope of Changing Gameplay Priorities. See also Magikarp Power for cases of weak things that become stronger after enough effort, like the wizard in this case. If the game itself scales alongside the quadratic wizard growth, then it can sometimes result in a Parabolic Power Curve for other classes, since they'll fall further and further behind the more levels they gain.