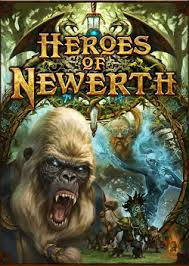 is a free-to-play Multiplayer Online Battle Arena game created by Frostburn Studios (formerly S2 Games), creators of the Savage game series. Envisioned as a Spiritual Successor to the popular Warcraft III mod Defense of the Ancients (and with permission from its current editor, Icefrog), Heroes of Newerth combines the mod's mechanics, terrain and a large selection of its most popular characters with a specially designed game engine and S2's own additions and tweaks, resulting in a game resembling Aeon of Strife... but different.

The story of this game takes place after S2 Games' FPS/RTS hybrid game series, Savage: Humans and beasts have long waged war against each other in the post-apocalyptic Fantasy Kitchen Sink world of Newerth, but the demons they used to summon to fight against the other rebelled and formed the demonic Hellbourne, invading and corrupting everything in sight. The humans and beasts decided to abandon their current conflict and formed the Legion in order to fight them.

You can read certain story arcs for this game here

. These stories reveal certain interactions between the characters, and more (that can't be found in-game).

After Dota 2 was unleashed, Heroes of Newerth started to deviate further from DotA, creating its own identity by modifying their ported heroes to be more unique, and adding additional content.