One Stat to Rule Them All 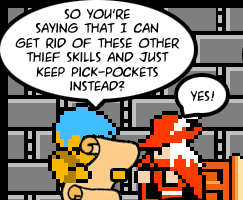 "I put all my skill points into 'Knowledge - Game Master.'"
Advertisement:

Game Balance is a tricky thing, especially if the game has a plot. The more variety you have, the harder it is to be sure that something isn't broken. Combinations of powers and abilities tend to have an Exponential Potential effect as more powers and equipment are published, making it all the more likely that something game-breaking will slip in. Once players find that game breaker, they will naturally want their characters to take advantage of it, and choose stats accordingly. As a result, almost every game has one stat that winds up being vastly more valuable than all the others, often called a "god-stat" in gaming circles. Expect minmaxers to put as many points into this as they are allowed to.

In many tabletop Role Playing Games, Dexterity or Speed is disproportionately powerful compared to the other attributes. These stats usually allow characters to dodge most attacks, give them extra actions or turns, and many useful skills in the game are governed by Dexterity. The likelihood of Dexterity or its equivalent being the One Stat to Rule Them All seems to increase the more technologically advanced the game's setting is (as guns, whose use and the ability to avoid presumably both depend on it, become more powerful while melee combat becomes conversely less useful): in a medieval fantasy game, at least melee combat requires Strength. In a modern game, as it was once put, "Dexterity determines how easily you sneak into the compound, how quickly you pick the locks, how accurately you shoot at the guards, how many of their shots you dodge in turn, how fast you make it to the escape vehicle, and how well you drive it."

Many video games with an encumbrance system have Strength (or some similar stat) as this, mostly due to the amount of weight you can carry being strictly based on it, Strength being required to use a lot of gear and still increasing combat capability otherwise. Some games don't even bother to split Endurance/Constitution from it and give it the ability to raise your HP, in which case Strength might as well be labelled "How good you are at combat".

Any stat that improves your ability to dodge attacks (often Speed, Agility, or Evasion) has a high chance of being this, simply because if the enemies can never hit you, your other stats technically don't even matter at all. Even if you never raise any of your other stats and have to spend several minutes Cherry Tapping every enemy to death, with bosses taking even longer, all the while everything can kill you in one hit, as long as nothing can get that one hit on you, you'll still win eventually (but you should probably raise your other stats anyway just to keep yourself from being bored to death). In games where dodging is a manual action and not simply a number that grants a higher chance for the Random Number God to make the enemies miss (for example, Soulslikes), the effectiveness of your dodge tends to be tied to the weight of your currently equipped gear. In that case, the god stat will be whatever lets you maintain maximum dodging effectiveness in absurdly heavy armor, if it exists. If it doesn't, expect nobody to bother with armor at all and wear the lightest possible cloth or even go naked. Even in games that don't have "stats" in the traditional sense, the Fragile Speedsters and Glass Cannons tend to dominate Metagames and tier lists.

In some games, increasing your stats has a negligible effect compared to your gear. For example, let's say increasing your Strength by 1 also increases your attack power by 1, but your sword has a base attack power of 100 already, so is that extra 1 point really going to do much? Or let's say increasing your Dexterity also increases your attack speed, but attack speed has a Cap, and you can easily hit the cap even at 1 Dexterity just by wearing a couple pieces of gear that increase it or even having your White Mage cast an attack speed buff on the whole party. In these games, it often turns out that Constitution is the stat of choice. Because even if everything else is overshadowed, one can never have enough HP.

Making speed the most important stat is often the result of a Visual Initiative Queue, since you can tell how manipulating speed will affect the turn order.

A Sub-Trope of Whoring.