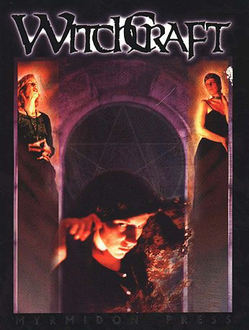 CJ Carella's WitchCraft is an Urban Fantasy tabletop RPG based on the Unisystem rules. The setting is a world like our own, but with an extensive Masquerade to mask the fact that just about every supernatural being and mythological figure exists (or has existed).

The players take the part of the Gifted, humans who secretly wield the power of magic, psychic abilities, divine miracles, or other supernatural talents. Set against the Gifted are a wide array of inhuman threats, Dark Covenants (evil Gifted who abuse their powers), the shadowy Combine (an ancient conspiracy that manipulates world events to oppress humanity), and the cults of the Mad Gods (who seek nothing less than the dissolution of Reality itself). For all of recorded history, the Gifted have kept their existence hidden, but now an approaching Reckoning threatens the world, and new Gifted are being born in record numbers. The time for hiding in the shadows is coming to an end.

While similar in many ways to the World of Darkness games, Witchcraft differs in having less emphasis on personal horror, a more integrated setting between the various supernatural factions, more of a Lovecraftian flavor (albeit with heroes who can often fight back against the sanity-blasting horrors), and more focus on human protagonists rather than monstrous ones.

A Spin-Off, Armageddon, takes place in 2017, where the Reckoning is in full swing, and the Church of Revelations is spearheading the takeover of the Earth on behalf of a near-omnipotent Mad God: Leviathan. This time, player characters include not only the Gifted, but angels, the forces of pagan gods, and even demons.