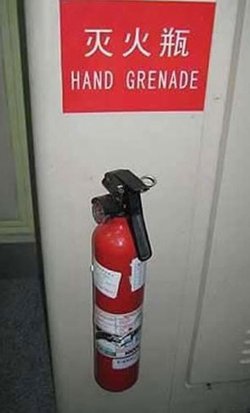 Fire extinguishers were called fire grenades until the 20th century, but nobody updated this translator.
"Caution: do not take while consuming alcohol or impregnating heavy machinery." I guess they let the Kudzu write the labels again.
— Suicide, Just One Letter
Advertisement:

A "Blind Idiot" Translation is a translation from one language to another where the translation is overly literal, grammatically incorrect, very awkward, or clearly misses what the word or phrase was supposed to mean. If a translation is complete gibberish with absolutely no relation to what is actually being said, it is a Translation Train Wreck. Sometimes overlaps with Gratuitous Foreign Language.

The name is not intended to be an insult against the translator (although it works just as well that way), hence the quotation marks: "blind idiot" is a Recursive Translation of the old saying "out of sight, out of mind". A computer in a lab was running a beta of some translation software package and translated "out of sight, out of mind" — meaning "if you hide something, sometimes people forget that it existed in the first place" — into Chinese and back to English, and the printout read "invisible idiot", which mutated further into "blind idiot".

Compare Recursive Translation. Also see Japanese Ranguage, Asian Speekee Engrish, and Intentional Engrish for Funny, where jokes are made about odd pronunciations. Can lead to Bite the Wax Tadpole. When someone tries to speak another language and fails horribly in this fashion, it's My Hovercraft Is Full of Eels. Especially hilarious cases may fall under Good Bad Translation. Can be used intentionally in a Gag Dub, if necessary with a dose of Mondegreen Gag.

There are pages contributing humorous examples of misguided translations. Perhaps the most popular one is Engrish.com.

Contrast with Golden Translator. (Though that has a meaning a little more complex than simply "good translator", although it broadly overlaps with such. See page for details.)