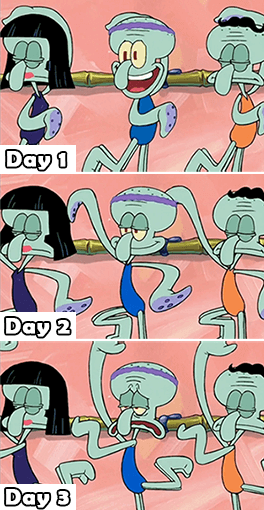 A character is delighted at some job or performance he's been assigned and jumps into it with a bright beaming smile.

A series of repeating short scenes show the various tasks as they go by.

But as the montage repeats, the pace of the character's work begins to slow, the music tempo falls to a crawl, the happy smile becomes a scowl and with a final *clunk* the character stops what they're doing and yells "I can't take it anymore!" or words to that effect.

The repetition of the job has finally overcome him.

Common and easy to do in animated shows since the character animations can be recycled over and over to instantly create the effect.

Often involves the character's face holding in place (and slowly changing expression) while everything else happens around it. For added hilarity points, a character may look up at the clock after boredom has set in to see that a very short amount of time has passed.

O'Neill & Teal'c are bored & while translating text in a time loop with Daniel.

O'Neill & Teal'c are bored & while translating text in a time loop with Daniel.