Blood on the Debate Floor 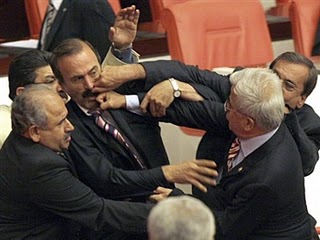 The Turkish Grand National Assembly must have skipped coffee that morning.
"You people play too rough for a simple soldier like me. Knives in the Senate House? Didn't think you had it in you."
— Mark Antony, Rome
Advertisement:

Sometimes, debates in legislatures can get a little too heated. The result: a scuffle—or occasionally even a full-blown brawl—breaks out on the floor of the chamber.

This sort of thing tends to occur most frequently in non-Anglophone legislatures, and has provided material for satirical TV programs for years. More dramatic slants, especially in Western fiction, often draw upon the assassination of Julius Caesar or Shakespeare's famous dramatization of it. In the United States, this actually was surprisingly common prior to the Civil War and its immediate aftermath, when the issue of slavery (and, later, the treatment of the recently-freed slaves) aroused tempers in the North and South alike.

Often started by a Fisticuff-Provoking Comment and may be the only interesting thing that Not-So-Omniscient Council of Bickering will ever do.

Compare "Cavemen vs. Astronauts" Debate when the debate is over something mundane or silly.

Note: In Real Life, while actual fist-fights are generally considered a bad thing, regular heated verbal debates (of the kind that only very occasionally erupt into physical violence) are paradoxically a sign of health for a country's democracy. If politicians are fighting in parliament, it means their opinions differ, and differ publicly, and that the legislature is actually a powerful enough institution to be worth fighting over. Dictatorships tend to have very polite, well-mannered legislative bodies (in effect, rubber stamp assemblies). On the other hand, heated debates regularly exploding into open violence can often be a warning sign of a country descending into civil war.

In the past, or in more Cultured Badass settings, more gentlemanly politicians would want to settle offenses by Throwing Down the Gauntlet calling for duels — either to the death or (more often) to the first blood.

, and it's depressingly common in real life.