Literature / Until Every Drop Of Blood Is Paid 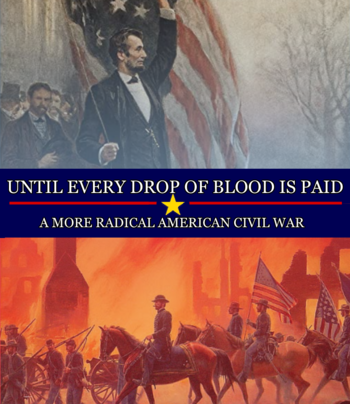 The Union Forever
"Fondly do we hope, fervently do we pray, that this mighty scourge of war may speedily pass away. Yet, if God wills that it continue until all the wealth piled by the bondsman's two hundred and fifty years of unrequited toil shall be sunk, and until every drop of blood drawn with the lash shall be paid by another drawn with the sword, as was said three thousand years ago, so still it must be said "the judgments of the Lord are true and righteous altogether."
— Abraham Lincoln, Second Inaugural Address (1865).
Advertisement:

Until Every Drop of Blood is Paid: A More Radical American Civil War

, by Red_Galiray, is an Alternate History timeline on AlternateHistory.com. A pro-slavery fanatic changes history when he decides to murder Lyman Trumbull, the Illinois politician who was elected to the Senate over Abraham Lincoln in 1854. Now a Senator, Abraham Lincoln arrives to a Washington where tensions between the North and the South are increasing each day. Thrust into the frontlines of the irrepressible conflict, Lincoln's views start to evolve and change faster than in our world. Little changes start to pile up, leading to a different, bloodier, and more radical American Civil War.

Tropes that appear on this page include: