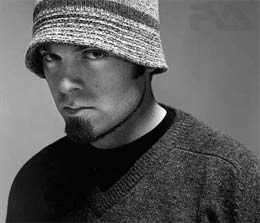 Joshua Paul "Josh" Davis (born June 29, 1972) better known as DJ Shadow, is an American DJ, producer and songwriter, known for his groundbreaking use of sampling and massive record collection of over 60,000 LPs. He and the Beastie Boys are generally cited whenever you're trying to convince somebody that sampling can, in fact, be used to make good music.

Davis began his career as a DJ for his university's campus radio station. His first two singles under the "DJ Shadow" moniker, "In/Flux" and "Lost and Found", were released between 1993 and 1994. They are considered the Trope Codifier for the genre of trip-hopnote Fun fact: "In/Flux" actually inspired the coining of the term "trip-hop" when it was used to described the single by music journalist Andy Pemberton, which had been already invented by Massive Attack in 1991. The songs were generally long and complex, made up entirely out of samples and fused together funk- and hip-hop-derived beats and occasional rock guitars with an ambient-jazz atmosphere, plus the occasional oddball sample of Spoken Word in Music. These singles attracted the attention of the British experimental hip-hop label Mo' Wax, with whom Shadow signed a contract shortly afterwards.

Shadow's first release for the label, Endtroducing....., was composed entirely using an Akai MPC60 sampler, a pair of turntables and the aforementioned massive collection of LPs. Besides getting a Guinness World Record for being the first completely sample-based album, the album only refined the style he had established on his earlier singles, employing expert sampling from more varied sources either known (Beastie Boys, Metallica, Twin Peaks, etc.) or obscure (Prince of Darkness, Pekka Pohjola, Rotary Connection, etc.) to create a unified album that one critic described as "a cross between Progressive Rock and Public Enemy". Endtroducing..... was greeted with unanimous acclaim by critics and fans and became Shadow's most well-known and respected album.

After Endtroducing....., Shadow laid low for a while, releasing the singles compilation Preemptive Strike and producing UNKLE's debut album Psyence Fiction. He also lent several of his tracks to Dark Days, a documentary about people who live in an abandoned section of the New York subway. A new album was finally released after six years, titled The Private Press. This album saw him slightly reduce his sampling due to increasing fees, focusing mostly on unknown sources, but otherwise continued with his trademark cinematic trip-hop style. While not as well-reviewed as his debut, Press still won acclaim from fans and critics.

A shorter hiatusnote further smoothed over by the release of the live album/DVD In Tune and on Time in 2004 ensued between Press and Shadow's next album, The Outsider, which retreated a bit from his prog-hop sound, featuring more collaborations with rappers and a few hyphy tracks, to mixed reception. He then continued releasing music throughout the 2010s, scoring a considerably big mainstream hit in "Nobody Speak", his 2016 collaboration with Run the Jewels, which has been used in numerous trailers and commercials.