Film / The Major and the Minor 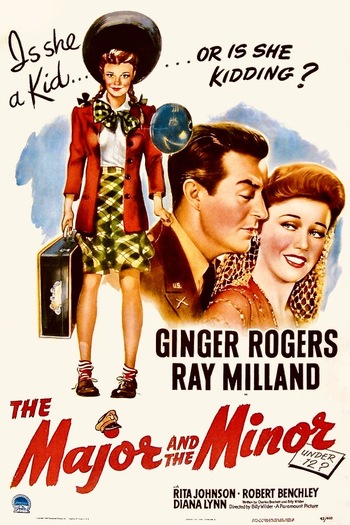 The Major and the Minor is a 1942 romantic Screwball Comedy film that was Billy Wilder's directorial debut in the United States.

Susan "SuSu" Applegate (Ginger Rogers) is a twenty-something who is disappointed with her job prospects in New York City and decides to return home to Iowa. Finding that the train fare is more than she can afford, she disguises herself as a twelve-year-old girl in order to buy a child's half-fare ticket.

While running away from suspicious conductors after she's caught smoking, Susan meets Major Philip Kirby (Ray Milland), who actually believes she's twelve, and offers her his spare berth for the night. But the train is stopped by a flooded bridge, and Kirby naturally can't leave an "underage" girl stranded all by herself, so he convinces her to stay at the nearby military academy where he works.

Said academy happens is run by Colonel Hill (Edward Fielding), whose daughter Pamela (Rita Johnson) just happens to be Kirby's fiancée. Pamela is actively thwarting Kirby's desire to return to active service, so that she can have a lovely wedding and long honeymoon, and the couple can remain stateside. Unfortunately, Kirby—who wants to take a more active role in the war—doesn't know anything about this deception.

At the academy, Susan finds an unexpected ally in Lucy (Diana Lynn), Pamela's teenaged younger sister, in whose room she is staying. Lucy—who is studying biology, and can tell that "SuSu" couldn't possibly be twelve (her calves have no baby fat and her smile lines are too deep)—promises to keep Susan's secret if she'll help her scuttle Pamela's plans.