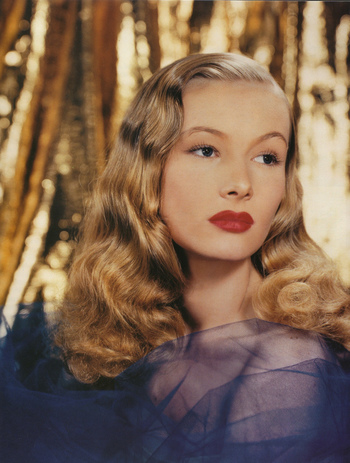 Veronica Lake (born Constance Frances Marie Ockleman; November 14, 1922 – July 7, 1973) was an American actress from The '40s who rose to stardom for her blonde peek-a-boo hairstyle and sultry voice. She was also a famous pin-up girl during World War II alongside the likes of Rita Hayworth and Betty Grable.

Her fame during The Golden Age of Hollywood was brief and tragic. She was only nineteen when she starred in 1941’s I Wanted Wings and was immediately in demand within the Paramount lot. She starred in various classics of the era: Preston Sturges’ Sullivan's Travels, Rene Clair’s I Married a Witch, and her various film noirs with Alan Ladd.

Because Veronica and her hairstyle were so popular, she was asked to change it to a "safer" version. Apparently, women factory workers (this was World War II) were getting their hair caught in their machinery because of this hairstyle (as Lake demonstrated in this photo

◊), so Lake changed it to the acceptable Victory Rolls hairdo to appease the US authorities. Purportedly, this caused her stardom to fall quickly.

However, she was difficult to work with and suffered from alcoholism like many stars of her era. After being put in various bad films and going through three unsuccessful marriages, she was rumoured to be completely destitute in the early '60s. However, she gained back some popularity after being discovered by a reporter; she released a well-received autobiography and did occasional stage and TV work.

Her last film appearance was in the horror flick Flesh Feast, which she partially financed. She died alone at the age of 50 as a result of her deteriorating mental health, as well as her binge drinking.

She was the inspiration for Jessica Rabbit from Who Framed Roger Rabbit and Kim Basinger's character in L.A. Confidential.