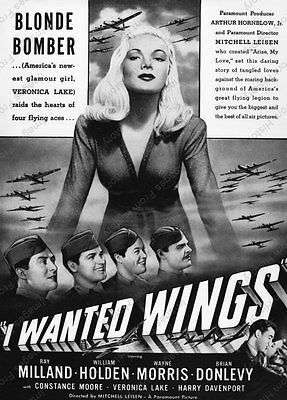 Veronica Lake is on the prowl.
Advertisement:

I Wanted Wings (1941) is a drama from Paramount directed by Mitchell Leisen, starring Ray Milland, William Holden, and in her first feature role, Veronica Lake.

This film tells the stories of Al Ludlow (Holden), Jeff Young (Milland), and John Cassidy (Wayne Morris) who have signed up with the Army Air Corps. It follows them as they deal with training, tragedy, and women.

This film won an Academy Award for Best Visual Effects in 1941 and was based on Bernie Lay Jr's book of the same name.