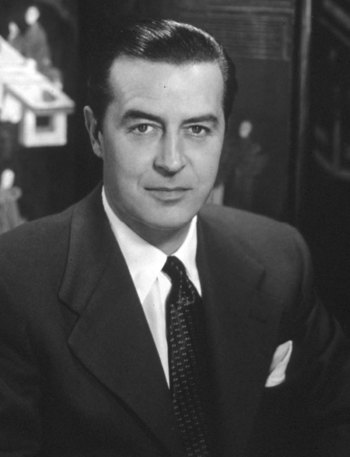 "The greatest drawback in making pictures is the fact that filmmakers have to eat."
Advertisement:

Ray Milland (born Alfred Reginald Jones; 3 January 1907 – 10 March 1986) was a British-born actor and leading man during The Golden Age of Hollywood, whose striking good looks and euphonious Welsh accent led him to a long and highly successful career playing charming urban sophisticates, as well as the occasional Evil Brit villain.

Born in Neath, Wales, Milland grew up in a well-to-do family before leaving at age 21 and briefly serving in the Household Cavalry of the British Army. Milland left the military for acting, getting small parts in films just as the talkies were coming to the British film industry. Bit parts and a couple of starring roles led to Milland emigrating to Hollywood, where he got more bit parts until his career stalled and he went back to England. Milland soon returned to America but couldn't find acting work, and instead took various menial odd jobs before he was finally signed by Paramount in 1933. A prominent role in Three Smart Girls in 1936 launched him to headliner status.

He appeared in a series of hit films throughout World War II (he was rejected for military service due to an injured hand) that culminated in The Lost Weekend in 1945. This film, one of the first movies ever made to seriously take on the subject of alcoholism, won the Academy Award for Best Picture and won Milland the Best Actor award. Milland enjoyed more successes throughout the 1940s and into the 1950s, including such films as The Thief, a spy thriller told without spoken dialogue, The Big Clock (remade 40 years later as No Way Out (1987) with Kevin Costner), and Alfred Hitchcock's Dial M for Murder in which he played a Villain Protagonist. As he aged Milland worked a lot in television as an actor and director, as well as in many terrible, cheesy, low-budget sci-fi and horror films. When he was asked why he'd appeared in so many bad movies in his old age, Milland cheerfully replied "For the money, old chap, for the money!"