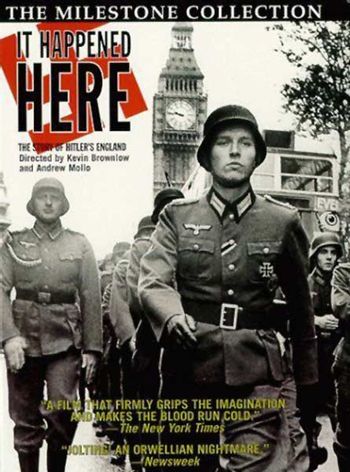 "But why did you join the Organization in the first place? When you joined that you accepted National Socialism, and you accepted every method it employs to achieve its aims."
Advertisement:

An Alternate History film set in a Nazi-occupied Britain, that explores the moral slippery slope leading to collaboration.

In 1944 the village of Shaftesbury is evacuated as part of a German crackdown on partisan activity in the area. Pauline, an apolitical Irish nurse, is accidentally left behind with several of her friends, all of whom are killed in a Resistance ambush. On reaching London Pauline finds nursing jobs are controlled by the paramilitary Immediate Action Organization, which she is reluctant to join. She changes her mind after witnessing the Organization efficiently putting down a brawl in which an IAO officer is brutally assaulted. Pauline has no interest in fascist ideals, but thinks resistance to the occupation is only making things worse and Britain should get back on its feet. Unfortunately she discovers that separating herself from the more reprehensible actions of fascism is not so easy in practice.

The concept of the film was first developed in 1956 by eighteen year-old Kevin Brownlow, and was eight years in the making — the longest ever production schedule to date according to the Guinness World Records. It had a cast of hundreds; all volunteers with only two professional actors among them. While trying to find WW2 uniforms for the film Brownlow met sixteen-year old history buff Andrew Mollo, and the two decided to work together on the project. Brownlow would later become a prominent film historian and Mollo a leading military historian. It Happened Here also launched the career of cinematographer Peter Suschitzky, who went on to such films as The Rocky Horror Picture Show and The Empire Strikes Back.