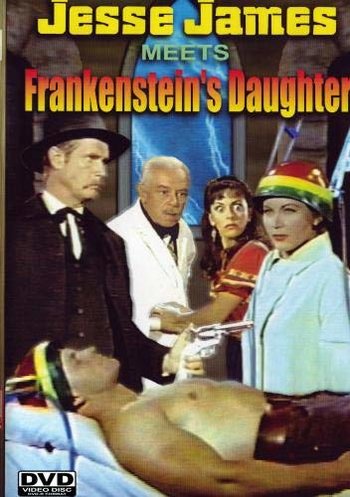 Jesse James Meets Frankenstein's Daughter is a low-budget western/horror hybrid film released in 1966, in which a fictionalized version of the real-life western outlaw Jesse James encounters the fictional granddaughter (the movie's title notwithstanding) of the famous Dr. Frankenstein. The film was originally released as part of a double feature along with Billy the Kid Versus Dracula in 1966. Both films were shot in eight days at Corriganville Movie Ranch and at Paramount Studios in mid-1965; both were the final feature films of director William Beaudine.

In an ancient monastery overlooking a small village in Mexico lives Maria Frankenstein (Narda Onyx) and her brother, Rudolph (Steven Geray),the grandchildren of the infamous Dr. Frankenstein, whose monster creation horrified Europe fifty years ago. Running from an American posse, Jesse James (John Lupton) and his friend Hank Tracy (Cal Bolder), are the last of the James gang. Hank is wounded. They meet Juanita Lopez (Estelita Rodriguez), and she takes them to the only doctor in the village. Once there, Maria sees this as a chance to complete the work of her grandfather. She sends Jesse and Juanita to get medicine for Hank and, while they are gone, performs a brain-transplant on Hank, and names the result Igor. She then orders him to kill her brother. Jesse returns and Maria tells him Hank has left. Jesse suspects otherwise.