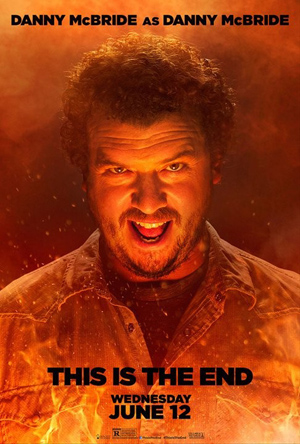 There are all kinds of fun ways to cast and credit celebrities.

This trope is when a real-life celebrity or famous figure is playing a fictionalized version of themselves, as a main character or recurring character. This is mostly a television trope, but there are film examples. For shows that take place in an alternate Hollywood, such as Curb Your Enthusiasm, Entourage and The Larry Sanders Show, this is the norm. It would be hard to believe it's Hollywood if you'd never heard of any of the "stars", would it?

As Himself is usually credited as, well: Report Siht as Herself. Though occasionally you will see Report Siht as "Report Siht". An actor might request the latter if they want it to be clearer that this is a purely fictionalized version of themselves.

Occasionally, there will be an example of this with a deceased star/famous figure. This will often be done using archive footage, but the trope still applies because they are still playing themselves in fictional circumstances (Forrest Gump didn't actually meet John F. Kennedy or Lyndon Johnson, folks).

Remember, if it's just a short gag, or one episode, that's either a Special Guest or a straight Cameo.

What's the difference between this and The Danza? Ask yourself this... is Alice playing a character who just happens to be named Alice as well? Or is she actually playing Alice? The first one is The Danza. The latter is As Himself.

Compare Celebrity Star, Character as Himself, Special Guest and Adam Westing. Not to be confused with For Halloween, I Am Going as Myself.

A Super-Trope of Newscaster Cameo (which is specific to newsreaders) and Leno Device (for talk show hosts).

Alternative Title(s): As Herself, As Themselves