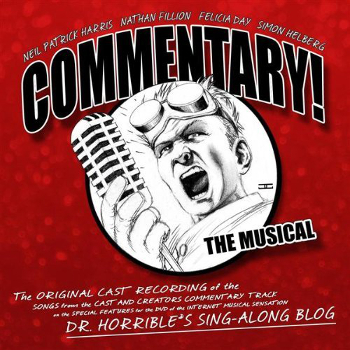 "Set course for wonder - It's a commentary!
Bring back the cast, we'll have a blast
Discussing the days of yore
Moments like these sell DVDs
(We need to sell more
We've only sold four!)"
Advertisement:

Commentary! The Musical is a commentary track on the DVD version of Dr. Horrible's Sing-Along Blog, where the cast - Neil Patrick Harris (Dr. Horrible), Nathan Fillion (Captain Hammer), Felicia Day (Penny), writer/director Joss Whedon, co-writers Maurissa Tancharoen, Jed Whedon and Zack Whedon, and several of the supporting actors - reunite to discuss the making of Dr. Horrible in the form of a musical featuring self-bashing songs such as "Better Than Neil" and "Ten Dollar Solo". The official lyrics and liner notes can be found here.

This may be the first and only DVD Commentary to earn its own TV Tropes page.

Commentary! The Musical contains examples of: