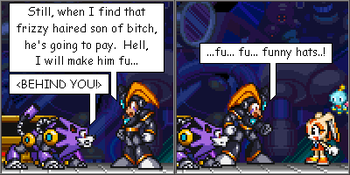 "[You] handled the Molesey Mystery with less than your usual — that's to say, you handled it fairly well."
— Sherlock Holmes (speaking to Lestrade), The Adventure of the Empty House
Advertisement:

The character was going to say one thing. At the last second, someone else comes into the room, or they just think better of it, and the character is forced to say something else. Last-Second Word Swap can be Played for Laughs or Played for Drama when a character quickly finds him or herself in a stressful or unexpected position.

Compare Curse Cut Short (where another character or outside circumstance cuts off the word), Right Behind Me (where someone else is listening without the character's knowledge), and Verbal Backspace (where the character doesn't quite catch himself in time and revises a statement after blurting it out). Contrast with Unusual Euphemism. Subverted Rhyme Every Occasion is a subtrope; before adding an example here, make sure it doesn't belong there. Contrast with Bait-and-Switch Comment, where the sudden swerve was intended from the beginning. See also Sue Donym.

Y'ever been talking to yourself and someone comes in the room and you have to make believe you were singing? [Dance moves] And you hope to God the other person really believes there's a song called "What Does She Think I Am, Some Kind Of Putz?"

But the very next one wasn't...
Misty: Oh he's the poké-trainer with the really big—
Brock: Cock!

A vote for Lobo and-Frag this!

Lobo promotes his presidential campaign but stops it.

A vote for Lobo and-Frag this!

Lobo promotes his presidential campaign but stops it.