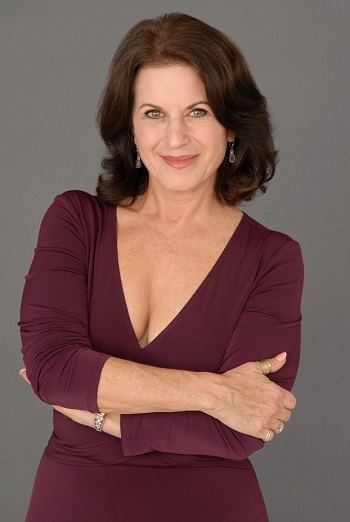 AAH! After ten thousand years, I'M FREE! It's time to CONQUER TV TROPES!!
Troper! Barbara Goodson has escaped! Write a description about her with attitude!
Advertisement:

Barbara Dale Goodson (born August 16, 1949) is a Brooklyn-born voice actor. Her best-known roles are either older women (or old ladies in general) or young boys (and back in the day, The Chick too). She is very well known as either Laharl or Rita Repulsa. Her capacity for ham knows few bounds.

She is notable for being one of the first actors to get regular work dubbing anime, being very prominent throughout the 80s and early 90s, appearing in many projects considered gateway drugs for anime fans at the dawn of the medium's popularity, and many titles regarded as classics today. She has also appeared in many older anime dubs that have since been redone over the years.

These here are the roles of the great Evil Overlady Barbara Goodson! HAAHAHAHAHAHAHAHAHA!!!:

That's all you can come up with for my description!? This description gives me A HEADAAAAACHEEE!!
Are you taking this seriously!? You gotta focus on your edits.