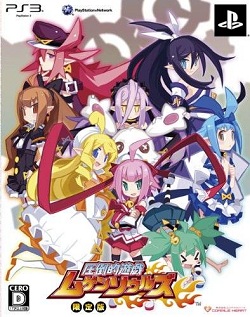 Literal Split Personality, in action.
The next Compile Heart game developed for PS3 under the direction of Keiji "Shin" Inafune (no, not that one).
Advertisement:

The plot revolves around Chou Chou, a self-proclaimed god who wishes for world domination.

Not to be confused with M.U.G.E.N (though somebody might put this game's characters in there if they haven't already).

A sequel was released in 2014, entitled "Mugen Souls Z" detailing the adventures of Syrma, who wants to become the "Ultimate God" once again with the help of Nao and Chou Chou. In 2015, the first game was ported to PC, and the sequel followed in 2016.