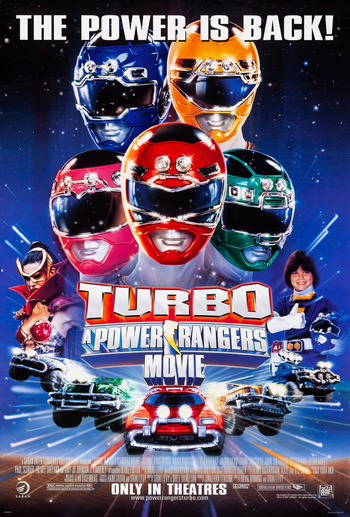 Turbo: A Power Rangers Movie is a 1997 film set in the Power Rangers franchise that takes place after Power Rangers Zeo in addition to serving as the Pilot Movie for the Power Rangers Turbo series (which premiered on April 19, 1997). The film is directed by David Winning and Shuki Levy, with the screenplay by Levy and Shell Danielson. It was released on March 28, 1997.

Some time after the Machine Empire's defeat, a powerful wizard named Lerigot (Jon Simanton, with voice dubbing by Lex Lang) arrives on Earth seeking their help stopping the plans of the space pirate Divatox (Hilary Shepard Turner), who intends to release (and marry) the demon Maligore (Mike Deak).

Turbo was also the final Power Rangers entry to feature Richard Genelle as Ernie before his death in 2008.