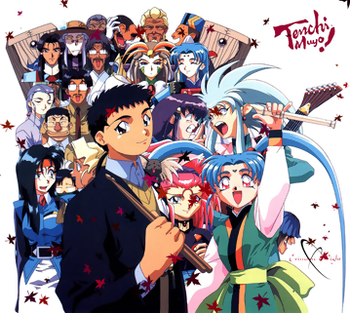 "He's got ninety-nine problems,
and these women are the main ones."
"But the most important discovery he'll make is that six crazy women, living under the same roof, all have the hots... for him. Now he'll have to deal with bounty hunters, ancient demons, mad scientists... and shared bathroom time.
The universe needs a new champion — Tenchi needs some peace and quiet.
Good luck."
— Toonami
Advertisement:

The OVA series Tenchi Muyo! Ryo-Ohki (simply Tenchi Muyo! in the United States) follows the life of Tenchi Masaki (voiced by Masami Kikuchi), the teenage grandson of a Shinto priest (who has taken it upon himself to teach Tenchi an ancient form of swordplay). When Tenchi steals the keys to — and intrudes upon — a sealed cave on the shrine grounds that legends say holds a sleeping demon, he accidentally releases Ryoko (Ai Orikasa), a Space Pirate who had lain in suspended animation for seven centuries. This lone act begins a cascade of events that results in Tenchi moving from Kurashiki to the Okayama countryside, acquiring a half-dozen alien girls in an Unwanted Harem, discovering his own secret heritage, and becoming involved in events of literally cosmic proportions.

Tenchi Muyo!, a classic "harem" anime of the '90s created by Masaki Kajishima, rose to popularity during the second major anime wave. The action/comedy science-fiction franchise started in 1992 as a six-episode OVA series by AICnote who were also responsible for all the following entries, listed below; an additional seven episodes quickly followed after the first six's success, although the second set of episodes ended the OVA's story on something of a Cliffhanger.

Viewers did not lack for Tenchi material in the decade-plus between OVAs, however. In addition to the OVA, Tenchi Muyo! spawned:

A third OVA series, which continued the original OVA's plot — and unveiled a lot of new surprises in the process — was produced in 2004. After a long absence, a fourth OAV series was released starting on November 2016 to August 2017, with this series setting up the events leading to War on Geminar. A fifth OAV series premiered in February 2020 and is scheduled to conclude in May 2021.

Throughout the majority of the franchise, the story revolves around the same basic core cast:

The characters and the exact relationships between them may vary from show to show (in the OVAs, Washu is Ryoko's mother; in the TV shows, she's a simply a partner in crime; in Pretty Sammy, she's her high school teacher), but one thing never changes — Tenchi is always getting chased by far more girls than he can handle.

The series was one of the first anime titles to achieve major popularity in the United States, and one of the first to receive a straight English dub free of a bowdlerized script or any edits. Along with Ranma ½, Sailor Moon, and other series in the mid-'90s, it helped contribute to the early internet-age "Anime Boom" in the United States. It found an even larger mainstream audience when it premiered on Toonami in 2000 (in a package that included the original OVAs, Tenchi Universe, and Tenchi in Tokyo). The show was also what put Pioneer (later Geneon) on the map as a major anime distributor, and Tenchi remained their signature title for much of their existence. Funimation now has the American rights to the vast majority of the mainline Tenchi franchise. The group released Tenchi Muyo GXP, the third OVA series (as Tenchi Muyo Ryo-Oh-Ki), Sasami: Magical Girls Club (spinoff) and Isekai no Seikishi Monogatari (renamed Tenchi Muyo: War on Geminar for North America) on DVD (and Blu-ray for Geminar); it also secured the licenses for and re-released the original OVA series (a Blu-ray and DVD combo set), Universe (DVD), Tokyo (DVD), and the three films (a Blu-ray and DVD combo set containing all the films) after the original American licenses fell into limbo. With the series first arriving in the US in late 1993 on VHS and LaserDisc, Tenchi Muyo has remained in-print longer than few other anime series, surviving through many different home video formats (VHS, LaserDisc, DVD, Blu-ray, legal streaming). However the Mihoshi Special (a part of the original OVA series), the Pretty Sammy OVAs, and the Magical Project S spinoff remain in limbo, and can only be found through Pioneer's original now-out-of-print DVDs.

Although it features tropes from many genres (Sci-Fi, Action-Adventure, Slice of Life, Romantic Comedy) Tenchi Muyo is generally recognized as an influential title in the Harem Genre, and paved way for other major shows such as Love Hina.