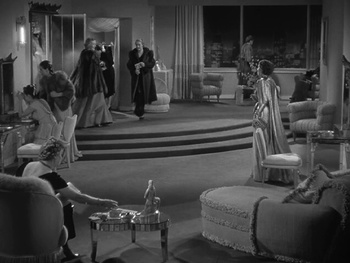 Apparently, this was what passed for a powder/cloak room in 1939.
[Raúl Juliá opens a random door and enters a beautiful Greco-Roman garden]
Mike: Ah, he wandered into the ladies room...
Crow: Man, that's why they stay in there so long! Those ladies; they get everything.
— Mystery Science Theater 3000, "Overdrawn at the Memory Bank"
Advertisement:

Seeing as Most Writers Are Male, and femininity is considered inaccessible to men, the women's restroom naturally has an air of mystery about it. Why do women go in pairs, what do they do in there and why do they spend so long doing it?

The general assumption seems to be that the ladies' room is in fact a mini-Shangri-La full of wondrous things. In extreme cases the ladies' room is portrayed as a mini-spa, complete with fountains and musicians, while in more realistic cases it's simply shown as being much cleaner and nicer looking than the male facilities. While more extreme portrayals of this are not Truth in Television, as women are just as capable of making total messes as men, paid maintenance personnel tend to be much faster about dealing with them, since the perception (accurate or not) is women are much more likely to care about such things.

And there is some truth to this. The ladies' rooms at most places (particularly restaurants) that are fairly upscale are usually kept cleaner, and they tend to be decorated with pictures and plants compared with the usually spartan men's rooms. Meanwhile, places that don't decorate the ladies' room often can't be bothered to perform basic maintenance or provide things like soap in the men's room.

While most ladies' rooms are fairly similar to men's rooms, it is not uncommon for a nice one to include a small anteroom before the restroom itself. This room may contain a couch, often will contain chairs, and possibly a lit vanity. This room is designed to make it easy for women to fix their hair or make-up without blocking access to sinks. It is also useful because lines for ladies' rooms tend to be longer than for men's rooms since women generally don't use urinals (which ladies' rooms lack anyway), do have to deal with menstruation, often visit the bathroom in groups, and often have young children of either sex with them who need assistance. Having a nicer room to wait in helps to balance this out a little. This is very rare in any men's room, which does provide more truth for the trope (and as stated on The Drew Carey Show, if the men's room had a couch would you want to sit on it?). The couches in the ante-bathroom may be placed there for the convenience of nursing mothers or women with cramps, or it may be a holdover from the days of fainting couches.

Sometimes related to "Which Restroom?" Dilemma when a crossdresser or a trans girl wants to be admitted to the ladies' room but may not be allowed to.