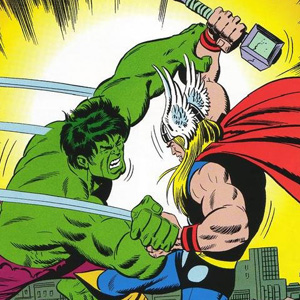 Two characters are fighting, and during the course of the battle, they clasp their hands together and push against each other in a test of strength. This can happen when one of them throws a punch or any kind of strike and the other catches it. They can stay like this for a while, with one trying to overpower the other and bring him to his knees.....

A Groin Attack is possible, as is Using Your Head. Also, the combatants need not lock fingers. Grabbing each-other's wrists is also an option. Or a character may show off their superior strength and/or skill by gaining leverage and performing a wrestling throw.

See Blade Lock for this with swords. Beam-O-War is this, but with, well, beams.