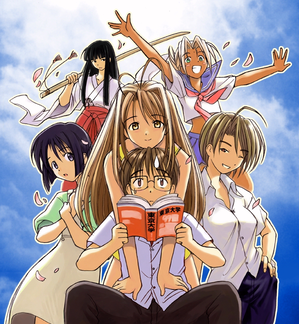 He's not as lucky as it seems. Left to right: top row: Motoko, Su; second row: Shinobu, Narusegawa and Kitsune; and Keitaro at the bottom. Not shown: Mutsumi, Haruka, Seta and Sarah.
"Let go of me! What if your low grades are contagious?!"
Advertisement:

Love Hina is a romantic comedy manga created by Ken Akamatsu, and widely regarded as a classic in the Harem Genre. The manga was originally published from October 1998 to October 2001 in Weekly Shonen Magazine, with an anime adaptation airing in 2000 from April to September.

Keitaro Urashima is a clumsy loser with a big dream: to attend the prestigious University of Tokyo. Fifteen years ago he made a Childhood Marriage Promise to a little girl that they would be reunited on the campus of Tokyo U and live happily ever after. Unfortunately, Keitaro has failed the annual entrance exams three times, and is now considered a "Rōnin": a deadbeat trapped in academic limbo between high school and university.

When his parents refuse to support him through another year of studying, his grandmother offers him lodgings as the landlord of the hot springs resort she owns. However, when Keitaro arrives at Hinata House he discovers his grandmother has left on a world tour and converted the building from a resort to an all-girls dormitory. The five female residents take extreme umbrage at the presence of a "perverted boy" in their midst, let alone someone as pathetic as Keitaro.

Through the course of the fourteen-volume manga (and the anime, which spans 25 episodes, two movies, and a three-episode miniseries), Keitaro wins over the girls of Hinata House, builds up his self-confidence, earns a career, and finds both love and his promise girl... just not all at the same time, and not without suffering a lot of pain.

While considered an archetypal example of the Harem Genre (and a classic of said genre), Love Hina is a comedy with a dramatic thread running through it. The story has a strong ensemble cast that brings together a wide variety of characters and character types into what can arguably be called a family. As one of the first anime to be produced entirely on computers (as opposed to the celluoid method), the art is crisp and clean, and it never suffers from the usual loss of quality that can affect traditionally-animated series during deadline crunches. It was also the first anime series whose fansub was distributed digitally. Although Keitaro is subjected to a large amount of cartoonishly slapstick violence at times, Love Hina is a love story—and the story of his growth into an adult.

Compare this series with Maison Ikkoku. Contrast with Negima! Magister Negi Magi (by the same author, and implied to be in the same universe).

Kitsune: (giggling) Imagine what Keitaro will think when he hears the samurai became a ronin...
(cue Motoko threatening to commit seppuku with a knife and Naru trying to stop her)